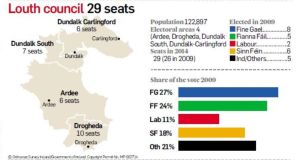 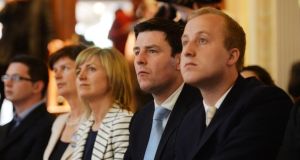 A battle is looming in the Wee County where sitting councillor Michael O’Dowd and his nephew Garrett jockey for position in the Drogheda area. It is a tight race as there are a further three Fine Gael and 16 other candidates running for the 10 available seats.

Garrett O’Dowd – son of junior minister Fergus O’Dowd – was added to the ticket at the last minute, much to the reported dissatisfaction of some in the Fine Gael camp who felt five candidates for one party in the area may split the vote. One local source described an “internecine battle” at play.

Michael, brother of the aforementioned Fergus, has been a councillor in the area since 1999. He has much to lose to his younger family member if it plays out as predicted and the electorate decides to vent its ire on the main Government party tomorrow.

A total of 29 seats in Louth County Council are up for grabs, with 69 candidates putting their names forward across four areas: Drogheda (10 seats), Ardee (6), Dundalk South (5) and Dundalk Carlingford (6). Fine Gael is running 15 candidates, Fianna Fáil 11, Sinn Féin 11 and Labour three. The remainder are a collection of Greens, non-party candidates and smaller parties, including Direct Democracy Ireland and People Before Profit.

Municipal councils Although town councils are being abolished this time out, Dundalk and Drogheda will retain municipal councils. The Louth constituency returned Sinn Féin president Gerry Adams at the last general election when he topped the poll. The party is expecting great things from its candidates.

The large, urban, working class base in Drogheda and Dundalk will allow Sinn Féin and other left-orientated independents to capitalise on issues such as water charges, youth unemployment and the supply of social housing. However, the party has also been making a point of raising issues relevant to the “working poor” – such as the mortgage arrears crisis.

Sinn Féin must now be within reach of significantly increasing their number of seats and mounting a challenge for control of Louth County Council, where Fine Gael and Fianna Fáil have traditionally divided the spoils. The locals will be a good testing ground for sitting councillor Imelda Munster, a potential running mate for Adams in the next election.

Labour will be relying on local faces and local votes in an effort to retain the party’s two seats.

Hold fire Drogheda-based union official Paul Bell and Pio Smith, who replaced local TD Gerald Nash when he was elected in 2011, will be in with a shot of keeping their spots if the Drogheda-based electorate hold fire on the junior coalition partner in favour of having a local voice at the table.

Fianna Fáil will be relying on dissatisfaction with Government and strong local candidates such as Frank Maher, Tommy Byrne, Liam Reilly and Peter Savage to return a respectable number of local representatives.