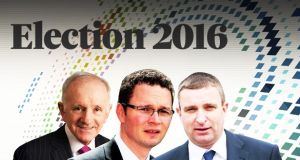 Fine Gael’s Tom Neville and Patrick O’Donovan have taken the final two seats in the Limerick County constituency, where the count is now complete.

Speaking after his election, Mr Neville a 40-year-old west Limerick Councillor, said he has had “politics in his Cornflakes since he was 10 years old”.

His father, who recently announced his decision to retire from politics, was among those celebrating his son’s success at the count centre in University of Limerick arena.

“It is a nice moment for the family as well, given I am continuing on where he has left off,” said the newly elected TD.

“I am absolutely humbled by the support I have been given. I can see from the national figures that the Fine Gael trend has been bucked here in County Limerick and the local supporters worked extremely hard.”

Mr Collins was adamant that the party would not do business with Fine Gael or Sinn Féin “I can’t see it happening,” he said. “What this country wants is a change of emphasis from government. I can tell you on March 10th Micheál Martin will be the nominee for Taoiseach.”

“We have said and I have said personally under no circumstances are are going in to prop up a Fine Gael proposition.... We have worked long and hard to rebuild our credibility as a political party and I think all that would just go for nought if we were to turn around and step into coalition with Fine Gael.”

Speaking at the count centre at University Arena O’Dea said it is “incumbent” on all newly elected TDs to put a stable government but also warned against Sinn Féin leading the opposition.

Mr O’Dea who got the highest first preference vote of Limerick constituencies said: “We are committed to doing what is best for the country There is a responsibility on all 157 new TD’s to try to put a government together... I don’t underestimate the difficulties but the responsibility is on us to try to get a government together to go forward,” said said Willie O’Dea.