Lessons from the past point way forward for forming government

The situation today is not dissimilar to 1948 and if parties compromise, a deal is possible 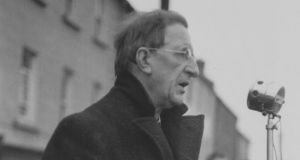 When John A Costello emerged as taoiseach of Ireland’s first coalition 66 years ago, it came as a surprise to everyone – and an unpleasant shock to two people in particular.

The first was outgoing taoiseach Éamon de Valera, who had expected to be returned to the office he had occupied for 16 years; the second was Costello himself, who neither sought nor wanted the job.

Made up of five parties and Independents, this coalition, known as the first inter-party government, may well have lessons, and warnings, for the politicians of today.

If the three biggest parties – Fine Gael, Fianna Fáil and Sinn Féin – stick to their pre-election positions and refuse to do business with each other, the only alternative majority government would have to include nearly all the other TDs in the Dáil.

Even with that, Sinn Féin could not muster a majority coalition, but with 41 TDs in Labour, AAA-PBP, the Independent Alliance, the Social Democrats, the Greens and other Independents, it is at least mathematically possible for both Fianna Fáil and Fine Gael to lead an inter-party government.

So what lessons can they learn from 1948? The first is the lesson learned by de Valera. He expected to be re-elected with the support of National Labour. These five TDs were a splinter from the main Labour Party and had been instructed by their Executive to vote for de Valera.

However, Fianna Fáil made it clear that no ministerial positions were on offer. Experience showed that another election would be on the cards when de Valera sensed the time was right – as happened when he formed minority governments in 1932, 1937 and 1943.

So the National Labour TDs joined the inter-party experiment, which offered a role in government and a later election.

So the first lesson is don’t count on votes that haven’t been nailed down and accept you may have to share the spoils or risk being outbid.

It spanned a wide ideological range: from the conservative, pro-Commonwealth Fine Gael to the radical republicans of Clann na Poblachta and from the small farmer party Clann na Talmhan to Labour and National Labour. Add to the mix a group of six Independent TDs, pledging to act together, and whose leader, James Dillon, became minister for agriculture.

So what held them together? The initial glue was opposition to Fianna Fáil. They all had reason to dislike the party often for contradictory reasons. While Fine Gael disliked de Valera for his opposition to the Treaty, Clann na Poblachta approved of his anti-Treaty stance, but disliked the tough measures he took against the IRA.

The other factor bringing them together was the knowledge that if they didn’t coalesce, they would never see the inside of Government Buildings. For most politicians, getting into government is the only way to implement the policies they believe in and serve the people they represent. This could determine how amenable the groups now in the Dáil are to compromise.

This is the third lesson: compromise is inevitable. In 1948, Fine Gael agreed that leader Richard Mulcahy would not be taoiseach, as others objected to his record in the Civil War. Instead, Costello was persuaded to take the job.

The smaller parties compromised too. Clann na Poblachta agreed not to push a number of its own aims, principally the desire to formally leave the Commonwealth and become a Republic. Although this was achieved during the inter-party government’s term, it was not part of its initial programme.

That programme wouldn’t look out of place today. Abolishing unpopular taxes (water charges, anyone?); dealing with the biggest problem in health (TB in 1948, emergency department crowding today); building more local authority housing; improved social welfare; increased production; reductions in the cost of living; and so on.

Extra funds to keep everyone happy will be in short supply in the coming years. But if parties find enough common ground and enough willingness to compromise, it’s not impossible. After all, stranger things have happened.

David McCullagh is a presenter on RTÉ’s Prime Time. He is the author of A Makeshift Majority: The First Inter-Party Government and The Reluctant Taoiseach: A Biography of John A. Costello