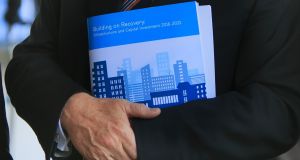 Taoiseach Enda Kenny has rejected Opposition claims of electioneering about the Government’s €27 billion capital plan and insisted it is affordable and realistic.

“I am not placing Ireland back in hock again,” he said.

The plan, which identifies all the major State infrastructure projects over the next six years, was launched at Heuston Station in Dublin on Tuesday by Mr Kenny, Tánaiste Joan Burton, Minister for Public Expenditure Brendan Howlin and Minister for Transport Paschal Donohoe.

Mr Kenny accepted that the programme could not cater for everything that the Government wanted to do.

“I can give a political thesaurus from Malin Head to Wexford of things that could have been included. One of the most important things you have to say when you’re in a government that’s serious about the recovery of the country is: ‘No.’ I have had to turn down requests from many Ministers, from many departments. The money is simply not there.”

Meanwhile, in a report released this Wednesday morning, the Economic and Social Research Institute has called on the Government to reverse its plan for a €1.2 billion to €1.5 billion package of tax cuts and spending increases in the budget next month. In a quarterly forecast, which said the rapidly expanding economy had no need for further stimulus, the ESRI said it would be better to pass a “neutral budget” with no fiscal expansion.

Mr Howlin, who drew up the multiannual investment programme emphasised the importance of a transport network to move goods and people quickly and safely throughout the country.

“We also need to provide public services efficiently and effectively,” he said.

The Department of Transport will be allotted €8 billion, or almost a third of the budget. Its single biggest project, the €2.4 billion, 16.5km Metro North, will connect the city centre with the airport and Swords and include two underground sections. Construction will start around 2021 with a view to completion by 2026.

Other big projects include the national children’s hospital, modernised maternity facilities in Dublin, motorway improvements, flood defences and a €3.8 billion package for education.

The Taoiseach emphasised the programme was sensible, sustainable and economically viable. He also dismissed any suggestion that there was bias towards Dublin at the expense of rural Ireland. He and Ms Burton said 45,000 jobs would be created, most during the construction phase.

The Tánaiste said the plan was a further indication that the economy was on the road to recovery. She said it was worth €42 billion when private investment raised by State-backed companies was included.

In addition to the 45,000 jobs the plan would generate, it would also lead to huge improvement in the quality of life for Irish citizens, she said.

Minister for Justice Frances Fitzgerald has been allocated more than €1 billion, which includes plans for a new family law and children’s court complex in Hammond Lane, Dublin and for Garda stations. In addition, about €205 million in new funds will be allotted for Garda technology and more than €46 million for the Garda fleet.