Ireland has ‘the most polluted village in Europe’ 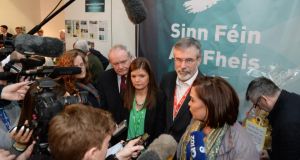 Ireland is home to “probably the most polluted village in Europe”, the Sinn Féin ardfheis has heard.

“It pains me to say that my village is probably the most polluted village in Europe. Recent figures showed nitrous dioxide was at 10 times the recommended level so literally we are being poisoned by the traffic that comes through our village every day,” he said.

He criticised the position that Ulster Unionists had taken over the Department of Regional Development, saying the Dungiven bypass project had been “parked and indeed been bypassed itself and leapfrogged by other projects”.

Dungiven is on the Derry to Belfast road.

Mr Ó hOisín also highlighted the poor state of the rail network and pointed to the “ridiculous situation last year where a man on a bicycle went from Derry to Belfast quicker than the train did”.

The redevelopment of the line had been mishandled and phase two was double what was planned, he said.

He said the North’s Department of Regional Development should look at using disused railway beds and at the possibility of the great northern railway line being put to use.

He praised the Mayo greenway and told delegates that more than 200,000 cyclists used the 42 km route in 2013, which brought in € 7 million to the local economy.

Mr McCarney said there should be a relatively cost effective way to develop a cycling greenway across the island.

He said they had a “fabulous cycle path from Ringsend to Clondalkin along the Grand Canal”.

But a neurosurgeon recently told RTÉ there was a 200 per cent increase in spinal injuries of people falling off their bikes or going over the handlebars, he added.

Dublin city council’s bicycle scheme has been a major success and has moved across the State. “But only 10 per cent of those who use these cycles wear helmets. They’re not provided with the bicycle,” he said.

Mr Ó Flanagáin said that Dublin was a very dangerous city to cycle in and even more so without a helmet.

“Bono fell off his bike and was lucky he didn’t kill himself,” he said.

With more children cycling, he said “we have to emphasise safety”.