Party’s ‘socialist views’ did not impress some senior IRA members, according to prison chaplain 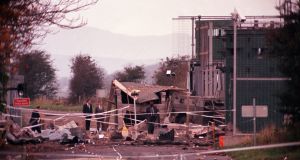 The IRA’s army council wanted to negotiate peace directly with the British government rather than its “least favoured option” of Sinn Féin joining talks, according to newly declassified files.

Documents, just released into the National Archives under the 30-year rule, suggest the Provisional IRA leadership did not unanimously back the party, but could “impose its view” on Sinn Féin, while the “reverse was not the case”.

A memo, marked secret, to then taoiseach Charlie Haughey in May 1990 updates him on efforts by two Maze prison chaplains – Fr John Murphy and the Rev Will Murphy – to nudge the IRA and the UVF away from violence.

As part of the early peace initiative, Fr Murphy had just had a “series of intensive discussions with the IRA Army Council”.

Briefing Irish diplomat Brendan McMahon about the discussions, the priest said the army council favoured direct secret talks, ahead of calling a ceasefire, with the British government.

“The Army Council’s preference is naturally for such talks to be held in public, though they accept that any talks would probably have to be conducted in absolute secrecy,” according to a note of the briefing from Fr Murphy (archive file 2020/17/34).

“The IRA’s third, and least favoured option, would be for talks involving Sinn Féin.”

Fr Murphy told McMahon that “one thing which has struck him in the course of this initiative is the noticeable difference between the IRA and Sinn Féin – with Army Council members referring to Sinn Féin as merely ‘the party which is closest to our view’ ”.

Murphy’s impression was that “not all of the army council are particularly enamoured with the socialist views being espoused by the current urban based leadership of Sinn Féin”.

The two chaplains had briefed four church leaders at the time: Cardinal Tomás Ó Fiach, Archbishop Robin Eames, Bishop Cathal Daly and Bishop Sam Poyntz of the IRA’s “willingness to seek an alternative to the campaign of violence” and that it was prepared “to enter exploratory discussions with the British government”.

Fr Murphy noted that there was “no question of a ceasefire at this stage” but that the intensity of IRA violence at the time might be “reduced” in the event of talks taking place.

Ó Fiach and Eames had both agreed to meet then secretary of state Peter Brooke to push for the talks.

In a separate memo to the taoiseach, Irish diplomat Dermot Gallagher, who went on to become secretary general of the Department of Foreign Affairs, notes a meeting he held with Daly, then Primate designate, in November 1990 at the church leader’s brother’s house in Belfast.

Daly told Gallagher that former IRA chief of staff Sean MacStiofáin – who “keeps in regular touch with the IRA leadership” – briefed him regularly on the army council’s thinking.

“As to the relationship between the IRA and Sinn Féin, the Bishop said that he is convinced that they are separate organisations; he also expressed the view that, while the IRA was in a position to impose its view on Sinn Féin, the reverse was not the case,” the memo records.

“If this is true – and we suspect the Bishop’s reading of the situation in this regard is accurate – it follows that the messages emanating from the IRA proper . . . probably carry more weight than anything emerging from the ongoing dialogue between [Gerry] Adams and John Hume. ”

In 1990 the IRA killed British politician and solicitor Ian Gow outside his home in east Sussex as well as increase its use of proxy bombs. On October 24th, Catholic man Patsy Gillespie was strapped into a car in Derry and forced to drive an IRA car bomb into a British army checkpoint, killing him and five British soldiers.

In an effort to get peace talks off the ground, Hume was regularly briefing the Irish government about his contacts.

In one memo of a briefing, also marked secret, the then SDLP leader said an emissary for the IRA had warned him that if peace efforts weren’t seized there would be at least two more decades of violence which would “plunge new depths of horror” including the shooting of nationalist politicians on the streets.

Hume told the government he was approached by Derry businessman Brendan Duddy “with what Duddy claimed was a document agreed by the IRA Army Council”.

Duddy was used by the IRA as an intermediary to Hume twice before and had driven Hume “part of the way” to a secret meeting with the IRA, so his approach was to be “taken seriously”, according to the memo.

The document foresaw an all-island nationalist conference being held – with an agreed date for the IRA to declare a ceasefire – in which a common strategy towards a united Ireland would be worked out “and subsequently presented to European Community leaders”.

“In this regard, the text was couched in language which emphasised Ireland’s place and role in Europe, and the fact that Irish people had always been European in outlook,” Hume told the government.

“The thinking here seemed to be that the British could be pressurised into responding positively to nationalist objectives through an effective campaign waged in a European context.”

Duddy went on to express “great concern” to Hume that if the “feelers from the IRA were left unanswered, the violence in the North could continue for another twenty years – and would in this period plunge new depths of horror”.

The businessman told Hume that there was “some hope of ending the campaign while Adams and people of his age group were in charge”.

“He was deeply worried and frightened, however, by the attitude of the huge mass of young (i.e. under thirty five) alienated, unemployed Catholics,” the memo notes.

“If they took over at some stage, then even more extreme action was possible – including, if they thought it helpful to their strategy, the shooting of nationalist politicians in the street.”