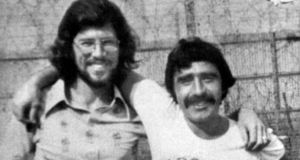 In his seminal account of the 1981 IRA hunger strikes, Afterlives, Richard O’Rawe writes that when, in 1991, he canvassed the idea that he might go public with his story of what really happened during the protest, that someone close to the Sinn Féin leadership told him, “as a friend”, that if he did, he could be shot. He wrote: “While he never used the words ‘shot dead’, I nonetheless felt that that was implicit in his warning” (p66). And so, fearful of the consequences, he kept his mouth shut.

And he did, for over 10 years, until the Boston College project reached out to him and he agreed to be interviewed about his role as public relations officer for the IRA inmates during the protest. He found the interviews such a liberating experience that, against my advice that his safety could be at risk, he wrote Blanketmen, his first book about the prison protest. If I had had my way Richard O’Rawe’s story would have stayed secret until his death. But he was insistent it be told.

O’Rawe’s account of the hunger strike gave an entirely different account of events from the one peddled by the Sinn Féin leadership, which placed responsibility for all the deaths on Margaret Thatcher. In O’Rawe’s account the late prime minister was responsible for just four deaths, the republican leadership for six.

Essentially, O’Rawe’s story, which in subsequent years was substantially confirmed by contemporary British documents released in response to his books, went as follows. In July, 1981, after five months of protests and four deaths, the British offered to concede a majority of the hunger strikers’ demands. O’Rawe and his immediate superior, the IRA jail commander, Brendan McFarlane, recommended that the fast should end but they were overruled by Gerry Adams; the hunger strike continued and a further six prisoners went to lingering, painful deaths. (This has been denied by Brendan McFarlane and senior Sinn Féin figures such as Gerry Adams and the then Sinn Féin publicity chief Danny Morrison).

Motive
So what was the motive for overruling the prisoners’ leaders? One possible reason was that a continuation of the hunger strike helped ensure the success of Owen Carron in that August’s Westminster byelection in Fermanagh-South Tyrone caused by Bobby Sands’s death.

That was because preserving the hunger strike also kept in place a deal with the SDLP not to intervene electorally in the constituency, thereby avoiding a split in the nationalist vote to the unionists’ advantage. Carron’s win was entirely dependent on IRA prisoners still being on protest when polling happened. Had the prisoners accepted the British offer, the SDLP would have fielded a candidate and Carron would have lost.

Instead Carron’s victory paved the way for Sinn Féin’s electoral strategy and set in motion forces that, as I write, have placed Sinn Féin on the cusp of government on both sides of the Border.

That July 1981 episode thus assumes critical historical importance. Arguably it also explains why O’Rawe was warned to keep his mouth shut in 1991, why he was so badly abused when he did make his story public and why Sinn Féin, and those like Dr Martin Mansergh (“Adams episode sounds warning on peace process”, Irish Times, May 7th, 2014) who recycle Sinn Féin’s talking points, are so agitated about the Boston College project.

The truth is that without the Boston College project this crucial chapter in modern Irish history would have been buried – perhaps disappeared is a better word – and hidden from view at the point of a gun. The only account to survive would be the one that suits Sinn Féin best, the version that heaps all the blame on Thatcher and keeps the focus well and truly off the Sinn Féin leadership.

This story, and the Sinn Féin-led offensive against the Boston project, is about more than the character of the man who might be Ireland’s next tánaiste, although it is surely that as well. It is about who controls the narrative of the IRA’s part in over 30 years of violence in the North.

Just as Adams wishes the world to believe that he was never in the IRA, so he also wants those like Richard O’Rawe who dare challenge his control of that narrative, his version of events, to remain silent.

The current campaign of intimidation led by Sinn Féin against the Boston project is really aimed at anyone tempted to imitate our efforts by trying to explore the reality behind the propaganda.

Hypocrisy
Mansergh accuses the Boston project of hypocrisy when I wrote that it was carried out in a “professional and detached” way. But when Dr Anthony McIntyre approached Richard O’Rawe – and others – for an interview he carried a tape recorder in his hands, not a pistol behind his back. We sought accounts about life in the IRA in interviews freely given by former activists motivated only by a desire to tell the truth as they saw it. Our crime was to unearth some accounts that were inconveniently at odds with the version of history that Sinn Féin wishes the world to believe and we interviewed people such as Brendan Hughes and Dolours Price who would be central in any narrative about the IRA. Not to have interviewed such people would have been remiss beyond words.

The logic of Mansergh’s critique of the Boston project is unavoidable. Should anyone wish to imitate our project, the potential interviewees should be asked one of two questions: do they believe Gerry Adams was in the IRA? Or, do they give unequivocal support to the peace process?

If they answer “Yes” to the first, and “No” to the second, or even hesitate in their answer (after all, one can favour peace, but dislike the process), then they will be excluded from recording their memories since they are, in Mansergh’s view, likely to be motivated by malice towards Adams or the policies he has helped put in place. Only in such a way can subversive, anti-peace sentiment be prevented from contaminating historical research.

That is the history telling of totalitarianism.