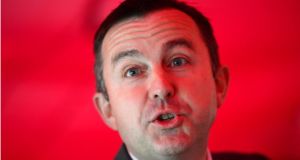 Minister of State Brian Hayes has refused to be drawn on speculation that he will contest the 2014 European elections for Fine Gael in the Dublin constituency.

Mr Hayes insisted today he was happy with his current role, which is split between the Departments of Finance and Public Expenditure and Reform, and said next year’s elections were a long way off.

He told RTÉ’s News at One programme it was important Fine Gael did all in its power to retain the seat that is to be vacated by the retirement of party veteran Gay Mitchell.

Mr Hayes said it was too early to say who would be running for Fine Gael, pointing to the fact the make-up of the European constituencies was not yet known.

A constituency review, to be published shortly, will have a bearing on the election as the number of Irish seats in the European Parliament is to drop to 11 from 12 from next year.

The race in Dublin is seen to be wide open with Mr Mitchell not contesting and the other two MEPs, Labour’s Emer Costello and the Socialist Party’s Paul Murphy, having taken on seats vacated by outgoing party colleagues Proinsias De Rossa, who resigned last year, and Joe Higgins, who returned to the Dáil, respectively.

Ms Costello and Mr Murphy will be contesting Dublin in the election and Sinn Fein is to select its candidate this weekend. Fianna Fáil has yet to put forward a candidate but will be very keen to take a seat given it is not represented in the capital at national or European level.

David Hall, of the Irish Mortgage Holders Organisation, said reports he had been approached by Fianna Fáil to contest the election were correct but that interest had come from local rather than national level. He said it was not the only offer he had received regarding his interest in running in the election.

Mr Hall is a former member of Fianna Fail and was a friend of the late minister for finance Brian Lenihan, the only party member elected in Co Dublin in the 2011 general election.

Fine Gael is seeking to run a strong candidate in Dublin to try to hold Mr Mitchell’s seat. Senator Eamon Coghlan, a former World 5,000 metres champion, has been linked with the job but there is also understood to be a preference within the party to run a female candidate.