Family of pregnant woman who died ‘saddened’ at Savita report

Recommendations made after death from sepsis not implemented 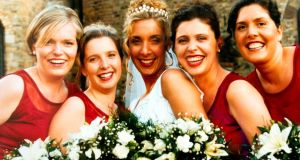 Tania McCabe (centre) who died who died after giving birth

The family of a pregnant woman who died in Drogheda hospital have said they are “saddened and disappointed” that recommendations made following her death had not been implemented in all maternity hospitals.

The Health Information and Quality Authority report into the death of Savita Halappanavar yesterday said there was a “disturbing resemblance” to Tania McCabe’s case from 2007.

The report said six out of 19 maternity units had no comment on the recommendations made after Ms McCabe’s death or had no evidence they were being implemented.

Ms McCabe, who was six months pregnant with twins, died after her membranes ruptured and sepsis set it. One of the twins also died.

Philip McCabe, Ms McCabe’s father-in-law, said it was surprising that the recommendations from the HSE inquiry were not fully implemented in all maternity hospitals.

His son Aidan, Ms McCabe’s husband, was upset on hearing the similarities to Ms Halappanavar’s case and that the recommendations following his wife’s death had not been implemented.

“He was there last night reading the report and reading it over again. It’s very hard to take,” he told The Irish Times this morning.

Following Ms McCabe’s death recommendations were made after an inquiry by team of experts in Drogheda.

The family said they assumed the same thing would not have been able to happen again because of the recommendations.

Mr McCabe said his family wanted to see the key recommendations from the inquiry implemented and for a standard test to be carried out for anyone presenting at hospitals where blood infection could be likely.

“If that were to happen it could save lives,” he said.

Mr McCabe earlier told RTÉ Radio One his son would like one day to meet Praveen Halappanavar, the husband of Ms Halappanavar.

The family have set up a foundation in Ms McCabe’s name to raise funds for hospital incubators.