Dáil ‘manipulated and abused by successive governments, including current one’ 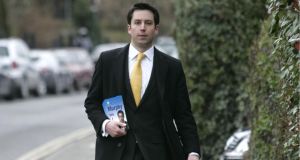 Fine Gael TD Eoghan Murphy has said he and his backbench colleagues had suffered “a little bit of Stockholm Syndrome” in their handling of the Irish Water issue.

Speaking during a podcast interview with The Irish Times today, Mr Murphy said Fine Gael deputies should have sought more speaking time during the Irish Water debate in the Dáil, but added: “You get into politics, it’s a new place, there’s a whip system, you don’t like it but over time it kind of wears you down. It’s a little bit of Stockholm Syndrome.”

He added that it was “really bad when new people come into politics and so quickly can find themselves beaten down by past practices.”

Mr Murphy was speaking on the subject of political reform on the Inside Politics podcast. The Dublin South East TD wrote an opinion piece in today’s Irish Times stating that the Dáil has been “manipulated and abused by successive governments, including the current one”

The Irish Water debate has placed Taoiseach Enda Kenny under increasing pressure in recent weeks. Mr Murphy is a member of the so-called five-a-side group of new Fine Gael TDs who have been in conflict with the leadership.

Mr Murphy said he realised that his comments might cause concern within the Dail because “people like to keep power to themselves” but that “power shouldn’t be concentrated in any one entity or any one individual.”

He added that he thought it was vital to “create a space where dissent is not seen as a form of attack.”

The emphasis until now he said had been on the economy and the Cabinet had been effectively put to one side by the Economic Management Council for “four people to control decisions by government.” He said he had understood the need for a “very solid structure” during the Troika but that it cannot be set as a “precedent for peacetime.”

Mr Murphy ruled against leaving the party for now as he believes that Fine Gael is “the only capable vehicle for change in Irish political society at the moment” but that the party had lost of the mandate it was given in 2011 to “make big sweeping changes.”

Without reform, he warned, there would be consequences. He that he trusted Enda Kenny and Joan Burton but “I don’t trust Gerry Adams and I don’t trust Sinn Féin and in the future we could have them in government.