Opinion: Nearly half the electorate has no opinion as to how it will vote at the next election 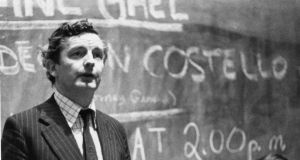 Recent controversies concerning EirGrid, Irish Water and much else convey a sense of disillusionment with politics and the political system; a sense that information coming from public bodies is untruthful, distorted or just spin; that politicians, as a class,
are con artists, interested only in their re-election and promotion.

This disillusionment seems reflected in opinion polls, which indicate that nearly half the electorate have no opinion
on how they might vote in the next
election, or intend to vote for Independent candidates – which, essentially, is the
same thing.

How could there not be disillusionment? This Government came to office proclaiming there had been a “democratic revolution” and then went on to do precisely as the previous government had been doing, while proclaiming this as a triumph.

The next few months will be absorbed in the local and European Parliament elections and they too are likely to reflect a popular disillusionment – unavoidably so, since local government now is almost meaningless and since the European Parliament has become a caricature of itself as an asylum for windbags. Where was it over the past five years during the most critical phase of the EU’s existence, as the least democratic institution of the EU, the European Central Bank, became the central locus of power?

Meanwhile, extraordinary things are happening in society and even in our language, which get minimal attention.

Meaning of reform
Take the innocent word “reform”. It was a vogue word some 50 years ago, notably in Fine Gael, when the late Declan Costello drafted his Just Society plan. In that context, “reform” had a radical progressive charge, a distributional one. Reforming our social welfare, health and educational systems to make our society fairer and more equal. Nowadays, “reform” means quite the opposite. It means the dismantling of the protection that workers enjoyed in their jobs, protection against unfair dismissal, protection against excessive exploitation, protection of their wages and conditions.

The word “taxpayer” has replaced the word “citizen” in our lexicon and this too has a sinister vibe, as though the taxation system is not a legitimate mechanism for distributing income unfairly allocated by the market system.

But more tangibly, there has been and is continuing to be a massive transfer of wealth under way from the ordinary person to a business elite. This is happening now via Nama and IBRC, a transfer that we are precluded from knowing much about. Billions in bank debt of privately owned companies are being written off by banks, notably, the former Anglo Irish Bank (IBRC in liquidation), much to the enrichment of the owners of these companies and, often, we, the owners or part-owners of the banks, cannot find out the scale of the write-off or the rationale for it.

Last April two of the banks that we, the public, own – IBRC and AIB – along with Ulster Bank, gave a debt write-off of €328 million to the owners of Jurys Inn. It is reckoned that the banks, notably the two owned by us, will write off about €2 billion of debt owed by the owners of hotels around the country.

Recently it was reported that our bank, the one in liquidation, IBRC, was going to sell Shelbourne Hotel debts of €289 million for €152 million, a proposed write-off of €137 million of our money.

‘Commercial sensitivity’
Of course, in some instances, debt write-downs were inevitable and secured the possibility of minimising the loss to the Irish public. In other instances, however, it is difficult to see why, for instance, a shareholding in the companies concerned was not arranged to give a prospect of a full recovery of the debt or at least a fuller recovery at a later stage. But we are not told what was involved in these arrangements, nor the rationale for the write-downs, involving our money, for the “authorities” deem it is better that we, the owners, be denied such knowledge, usually on the catch-all claim of “commercial sensitivity”.

Aside from that, there are the enormous fees paid to legal, accountancy and consulting firms, many of which were involved in the banks that caused the debacle and, therefore, bear responsibility in part for that debacle.

Wall of secrecy
Then there is Nama, which, according to its 2014 annual statement, is managing loans of the largest 189 “debt connections
– aggregate par debt at acquisition of €61 billion” and it is doing this behind a wall of secrecy.

If anything, the scale of the disillusionment is not enough. It is contained by the spectacle of minor skirmishes such as the current row over the €50 million spent by Irish Water on consultancy fees. Were the full story appreciated – the vacuity of our “democracy”, the irrelevance of our parliament, the unstinting deference to the masters of the business universe, the deepening of inequality, with all its belittlements and cruelties – perhaps disillusionment would give way to despair.