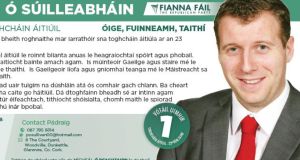 A hard fought battle in west Cork concluded in losses for Fine Gael with gains for Sinn Féin and Independents after an epic count.

They followed Christopher O’Sullivan (FF) on the 13th count, while FF running mate Joe Carroll and FG’s Noel O’Donovan were returned earlier this morning on the 11th count. O’Donovan, at 25, was the youngest candidate in a field of 19.

The big story of the 1,295 sq km constituency arrived at the first count when Independent candidate Michael Collins sailed home with a massive 3,031 first preference votes.

The waiting game proved a battle of endurance and it was the Sinn Féin contingent that held out in force to utter jubilant cheers at the final count.

“We hoped for six or seven seats (in Cork county) but we never really hoped for this,” Hayes said.

“Fine Gael had six sitting councillors running, it was a risky strategy. Traditionally it’s a region with a strong conservative Fine Gael/Fianna Fáil vote. Here we’ve seen it was mostly Fine Gael voters opting to vote for Sinn Féin for the first time. There’s a change in the mood,” Mr Hayes said.

Michael Ahern was eliminated on the 7th Count in the Cobh Electoral Area. Mr Ahern served as a junior minister on three occasions. He was minister for science and technology (1992-1994), minister for trade and commerce (2002-2007) and minister for innovation policy (2007-2008). He lost his seat at the last general election.

Another high-profile casualty was Labour’s Martin Coughlan, who lost his seat in Macroom after nearly two decades in local politics. Cork County Mayor Noel O’Connor (FG) also lost his seat, mirroring the fate of his Labour counterpart in the city, Catherine Clancy.

In Carrigaline Ballincollig, the party breakdown went in the favour of FF (3 councillors) Fine Gael (3), Sinn Féin (2) and two Independents.

Joe Harris secured the last seat of the count shortly before 9am yesterday (Sunday) beating Fine Gael’s Garret Kelleher by just 12 votes. Despite the narrow region of his loss, Kelleher decided against applying for a recount.

Mr Kelleher wished the successful candidates the best of luck in the coming years.

“At this hour of the morning nobody would be thankful if I called a recount. I felt that in this situation that it is likely that I would lose as many votes as I would pick up. I would like to take this opportunity to wish all the 10 councillors every success in the years ahead.”

Among the successful candidates was Mary Rose Desmond who works in Deputy Micheal Martin’s constituency office in Turners Cross, Cork. The decision to put Desmond forward as a candidate reportedly irked some local Fianna Fáil members, as it was taken without discussion with the existing candidates.

Minister for Agriculture and the Marine, Simon Coveney, said the the Government received a beating at the polls despite their best efforts.

“We have asked Irish people to make extraordinary sacrifices over the last three years. They gave us a huge mandate in the last general election and to fix all the problems Fianna Fáil created. We are trying to do that as best we can. We have had mistakes and we are being punished for that but we have also made huge progress.”

Opposed to water charges and property tax, the mum of two said “people are looking for change”.

“The others haven’t delivered,” she said.

The surprise incumbent here is first time candidate James O’Donovan FG (25) from Bandon, a sales manager who said he offered truth and honesty to West Cork voters, who came through on the 8th count with 2,222, 61 under quota.