Inquiry expected to examine who in Government knew about Garda recordings 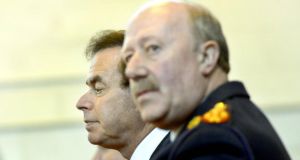 The Government is set to ask the Commission of Inquiry into the Garda taping affair to examine the events surrounding the resignation of former commissioner Martin Callinan two weeks ago.

Ministers expect to settle the terms of reference for the inquiry by Mr Justice Nial Fennelly when the Cabinet meets tomorrow. The expectation last night was that he would be asked to complete his work within approximately one year.

Final details on the scope of the inquiry remain to be hammered out, but it will examine the establishment and operation of the recording system, the recordings themselves and the implications for cases before the courts and cases that have been concluded.


Chain of events
Senior Government figures said the judge was likely to be given a mandate to investigate the chain of events which led to the establishment of the commission. This includes some of the most contentious elements of the affair, including Mr Callinan’s resignation.

His departure came the morning after Taoiseach Enda Kenny sent Department of Justice secretary general Brian Purcell to Mr Callinan’s home to tell of the seriousness with which disclosure of the Garda recordings was viewed within Cabinet. However, Mr Kenny has rejected Fianna Fáil claims that he had Mr Callinan sacked.


Decision
Also in the terms of reference will be the question of who in Government knew what and when about the recording of phone calls in Garda stations before the decision was made to set up the inquiry.

This suggests actions within the Department of Justice and the lack of knowledge on the part of Minister for Justice Alan Shatter will have to be investigated. The judge will also be asked to examine recordings made in prisons between prisoners and solicitors, it is understood.

In addition, the terms of reference will leave it open to the Government to bring any other covert recording system within the scope of the inquiry. While a source said the Government did not know of other recordings, Ministers do not want to run the risk of having to establish a separate inquiry in the event of any further unexpected disclosures.