Man was one of 99 people chosen to examine Eighth amendment 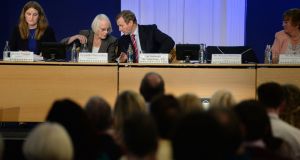 Fresh criticism has been levelled against the Citizens’ Assembly after it emerged one member stepped down last weekend because he had previously campaigned for a pro-choice group.

The man was one of the 99 people chosen to examine the Eighth amendment of the Constitution, which places the life of the unborn and the mother on an equal footing.

At its first meeting last Saturday, the man made chairwoman Ms Justice Mary Laffoy aware of his membership of a pro-choice group.

He was then replaced on the assembly.

Independent TD Mattie McGrath said the incident raised a number of issues around the process used to select members of the assembly.

He said polling company Red C, which was tasked with identifying members for the body, should not have allowed this to happen.

“How is it that despite Red C specifically reminding people who were polled that active campaigners on either side of the issues were to be excluded, that at least one high-profile social media campaigner for repeal was selected?” he asked. “This raises real and credible doubts that must be addressed.”

The Government chose Red C after a competitive tendering process. It was tasked with finding 99 members to examine a number of issues.

Those on the assembly are allowed to have opinions on the Eighth amendment but cannot comment on them publicly.

A spokeswoman for the assembly said potential members were asked if they had or intending to act in an advocacy role for interest groups.

“This was asked of potential members again during the validation phone call with RedC who carried out recruitment on behalf of the Assembly,” she said.

“Any potential members who answered yes to these questions were excluded from the process.

“Following the inaugural meeting of the Assembly a citizen member brought his previous membership of an advocacy group to the attention of the Secretariat and as a result is no longer a member of the Assembly.”

Meanwhile, the Anti-Austerity Alliance-People before Profit Alliance is to hold a rally in Dublin Saturday seeking a repeal of the Constitutional clause.