Catherine Byrne plays ball, but blame game is far from over 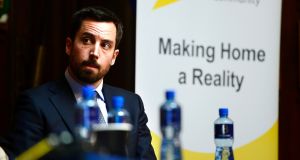 The public face of politics loves drama, and nothing supplies it like a cliffhanger vote as a Minister contemplates resignation, or – even better – sacking.

But the will-she-won’t-she surrounding junior Minister Catherine Byrne in Leinster House on Tuesday, as a motion of no confidence in the housing Minister Eoghan Murphy approached, failed to grab anyone’s imagination.

That was partly because the Government was always likely to win the vote. While the numbers are tight in the Dáil, none of the unaligned Independents who form the Coalition’s buffer zone have an appetite for an early election. In truth, nobody else does either. Labour and the Greens voted no confidence in Murphy, but, had their votes been decisive, it’s doubtful they would have plunged the country into a general election at the most uncertain point in the Brexit negotiations.

But the drama was diminished because of the nature of the dispute between Murphy and Byrne: she objects to social and affordable housing in her constituency being promoted and financed by Murphy’s department. She hasn’t spoken to the media, but reiterated her objections in a statement on Monday night.

It’s trouble in the constituency – not the stuff of high principle. Most local representatives in her constituency support the plan, though there is clearly opposition in some quarters, and Fianna Fáil Senator Catherine Ardagh – a real challenger for a seat – declined to give her views on the project.

In the end Byrne overcame her reservations, a relief for Murphy, who hasn’t had many these past few months. And Byrne remains in her (junior) ministerial job. But it ended with something more like a whimper than a bang, a statement issued before the nine o’clock news.

Murphy came out fighting, but his relief might not last for too long. Public concern about housing seems to be growing and, as the numbers in emergency accommodation tip towards the 10,000 mark, it will stay at the centre of the political agenda. That puts Murphy in the firing line.

Murphy’s badgering of local authorities to provide more accommodation by the end of the year – which made “Minister takes action” headlines at the recent Fine Gael think-in in Galway – will prove difficult to turn into results.

He will face another Private Members’ motion next week, this time with cross-party support. It calls on the Government to declare the housing and homeless crisis an emergency; to increase the supply of social and affordable (including cost rental) housing by increasing capital spending on housing to €2.3 billion in Budget 2019; to increase Part V requirements to 20 per cent in standard developments and 30 per cent in Strategic Development Zones – and several other measures which Fianna Fáil will find it hard to oppose. They will undermine the Fine Gael position that nobody has put forward any alternatives.

More significantly, perhaps, the motion will be accompanied by a demonstration outside the Dáil that has been organised by the Irish Congress of Trade Unions, and will bring together NGOs, students’ unions, community and campaigning groups and homeless charities. Along with the parties in the Dáil, it is a coalition as broad as anything mustered in opposition to a government policy in recent years. Protests might not build houses, as the Taoiseach said. But they can certainly apply political pressure.

Tuesday night’s no-confidence motion is the beginning, not the end, of the political challenges the Government will face on housing in the autumn. They won’t be all as easily dismissed.