Comments seen as shot across the bows of Labour Ministers 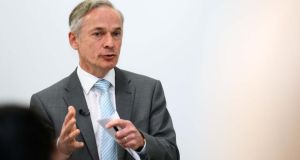 The budget battle over how the €1 billion promissory note savings should be spent will begin in earnest today, with senior Fine Gael Minister Richard Bruton insisting tax cuts are necessary to sustain economic recovery.

Mr Bruton’s remarks represent a shot across the bows of Labour Ministers who have been calling for a scaling back of spending cuts in line with the country’s improving finances.

Some Labour TDs have called for higher taxes on those earning more than €100,000.

As the Cabinet meets in Dublin for the first substantive discussion on budget options Mr Bruton, the Minister for Enterprise and Jobs, will tell an international audience that ordinary Irish families who have taken so much pain in recent years need to see a reduction in their tax burden.


Address burden
In a speech to be delivered to the International Labour Organisation in Geneva, as part of his duties under the Irish EU presidency, the Minister will say that Ireland must address the burden of income tax on people with average incomes to create the jobs required to tackle the unemployment crisis.

“For example, a recent report from the Irish Government’s advisory body on industry and competitiveness has shown that the marginal rate of income tax at 52 per cent for employees and 55 per cent for self-employed is higher than in most of our competitor countries,” says Mr Bruton.

“It also kicks in at a much lower level of income. In fact at €32,800 for a single person, the threshold is below the average Irish income,” he adds.

The Minister says tax rates of more than 50 per cent on average incomes did damage to inward investment and entrepreneurship and made too many people question whether they would be better off not working.


Turnaround
Mr Bruton says that, over the past two years, Ireland had experienced a turnaround in employment trends.

Ireland had gone from a position in the private sector where in the years between 2008 and 2010 we were losing over 7,500 jobs a month to one where it was now adding more than 2,000 jobs a month over the past year.