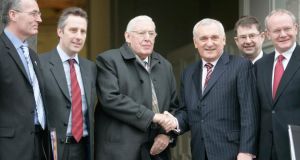 Former taoiseach Bertie Ahern described Dr Paisley yesterday as “a big man with a big heart” whom he regarded as a good friend.

Mr Ahern said he was very sad to hear of Dr Paisley’s death and extended his sympathies to his wife Eileen, and his five children – “especially his son, Ian Jr, who I know well”.

Mr Ahern said he worked closely with the former DUP leader on the peace process. “We both came from very different political traditions, but the more I got to know Ian Paisley, the more I respected him and the more I came to like him. In my dealings with him I found him to be unfailingly polite and a man of his word.

“I will never forget his warmth and his sincerity that day he first shook my hand in Farmleigh on a glorious spring day in 2007. He had a warm personality, he was witty, he had a keen sense of humour and a booming laugh. This helped to build relationships from the start.

“I remember at our first-ever meeting, which was a breakfast summit in the Irish Embassy in London. He ordered a hardboiled egg. He then proceeded to tell me, with a twinkle in his eye, that this was to be sure I couldn’t poison him! It was his way of breaking down barriers.”

The former DUP leader was a man of “deep convictions” whose early career was characterised by an “uncompromising position of a constitutional kind”, according to Mr Higgins. “However, his embracing of the change necessary to achieve a discourse that might lead to peace was of immense significance, as was his commitment to building relationships in support of that peace.”