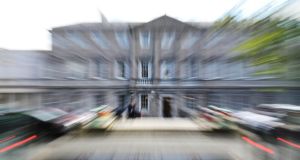 It is an unprecedented development that the mainstream media have been prevented from publishing privileged remarks in the Dáil due to the threat of legal action. Photograph: Frank Miller/The Irish Times.

Comments made in the Dáil by Independent TD Catherine Murphy can not be published at present by the Irish Times and other media outlets because of a High Court order.

It is an unprecedented development that the mainstream media have been prevented from publishing privileged remarks in the Dáil due to the threat of legal action.

The clash between the constitutional privilege accorded to statements made in the Dáil and the requirement not to breach a court order has caused serious concern throughout the media and political worlds.

The dilemma stems from a High Court order, made last week, which prohibited publication of information about businessman Denis O’Brien’s banking arrangements.

Mr O’Brien has strenuously denied the claims made in the Dáil by Ms Murphy. He has insisted that they were false and amounted to an abuse of Dáil privilege.

Lawyers acting on his behalf also claimed the details were covered by an existing temporary injunction that Mr O’Brien succeeded in getting after High Court proceedings last week.

That temporary injunction prevented RTÉ from broadcasting a report on the substance of the subject at the centre of Ms Murphy’s comments which related to the banking arrangements between Mr O’Brien and the IRBC, formerly Anglo Irish Bank.

That order was directed at any person or media outlet on notice of it, including The Irish Times.

While Ms Murphy’s Dáil comments are not being published in the mainstream media they were published on the official website of the Houses of the Oireachtas.

The contradiction between the Constitutional privilege given to statements in the Dáil chamber and the existence of a prior court order prohibiting the publication of specific information is a unique situation which nobody in Leinster House can recall having happened before.

Dublin Labour TD Robert Dowds summed up the views of many politicians when he said yesterday that it was hard to believe any High Court judge could knowingly have granted an injunction that prevented the news media from publishing a verbatim report of proceedings in the Dáil.

“If that is indeed what the High Court did, then the decision must be immediately appealed. If this is what has occurred, then the national media has effectively been barred from reporting on proceedings in the national parliament.

“And, if neither RTÉ nor any other news media organisation will take this step, then I believe the Houses of the Oireachtas Commission will have to do so. But the first step is for the media to take.”

Moves will be made by leading media organsiations to have the issue clarified in the High Court next week.

Under article 15:12 of the Constitution TDs are entitled to legal privilege for comments they make in the Dail chamber.

The Constitution reads: “All official reports and publications of the Oireachtas or of either House thereof and utterances made in either House wherever published shall be privileged.”

There is also specific provision in the Defamation Act that reporting on statements made in the Dáil benefit from privilege.

In the past this has allowed the media to publish statements made in the Dáil or Seanad without fear of legal action even if the statements prove to be untrue or defamatory.

The standing orders of the Dáil provide guidelines about the use and abuse of privilege and set out a process whereby people who believe they have been defamed may seek redress.

Standing orders 59 of the Dáil specifies that : “A member shall not make an utterance in the nature of being defamatory and where a member makes such an utterance it may be prima facie an abuse of privilege, subject to the provisions of this Standing Order.”

Under the standing orders the Committee of Procedure and Privileges (CPP) is empowered to investigate claimed abuse of privilege and recommend sanctions.

The CPP ruled last December that Sinn Féin deputy leader Mary Lou McDonald had abused privilege by naming alleged tax offenders but it did not have the power to implement further disciplinary procedures.

The CPP has since sought legal advice about how it can impose more effective sanctions for similar abuses in the future.