Sikorsky S-92s to be deployed at Sligo and Waterford 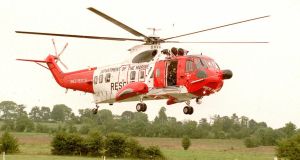 The two S-92s are currently having their livery assigned at Shannon Airport, and will be deployed to Irish Coast Guard search and rescue bases at Sligo and Waterford in July and September respectively.

The final two aircraft in the fleet of five S-92s will be delivered next month and will be assigned to Dublin and Shannon coastguard bases.

The fifth aircraft may move bases to provide a back-up to the fleet, which replaces the 20-year-old Sikorsky S-61s.

Built to specifics drawn up by the Irish Coast Guard, the first S-92 was acquired last year and began work at Shannon last July.

Advanced systems
It has a faster speed and longer range and is equipped with advanced systems and hardware, including an automated flight control system that enables the pilot to fly pre-programmed search patterns and “perform delicate hover manoeuvres”, according to the manufacturer.

The Shannon-based S-92 has been able to respond to cardiac cases, including inter-hospital transfers, and the extended scope of work has resulted in an increase in missions to more than 30 for May of this year, compared with an average of 10 to 15 a month missions previously.

A technical problem grounded the aircraft earlier this month, when it landed to refuel on the Eirik Raude oil rig working on ExxonMobil’s Dunquin prospect drilling programme some 85 nautical miles (157km) southwest of the Kerry coast.

Faulty sensor
A faulty sensor that activated a warning light prevented it from completing a medical evacuation mission to a cruise liner some 800 nautical miles (1,481km) off the southwest coast.

Company sources have said that the issue was minor, but safety precautions had to be taken. The aircraft had airlifted an injured crewman from the same rig to shore last April.

Leased
All five aircraft have been leased by Irish Coast Guard search and rescue contract holder CHC Helicopters from CHC Global Leasing, based in Dublin, under a 10-year contract costing €50 million annually. This had been criticised by Fine Gael at the time of its signing by former transport minister Noel Dempsey.

President signs Bill on mother and baby home records into law 22:39
US election: Pence to continue campaigning, after staff positive for Covid-19 22:19
Ronan Finn on why Shamrock Rovers are worthy champions 22:00
Two cyclists die on roads in Co Cork at weekend 21:57
Jamie Vardy comes on to score winner at Arsenal 21:41