The purported remains of the poet, WB Yeats, who died in January 1939 and was buried at Roquebrune-Cap-Martin in south-eastern France, was brought by sea from Nice to Galway in September 1948 for reinterring in Drumcliffe Churchyard in Co Sligo. Video: Defence Forces 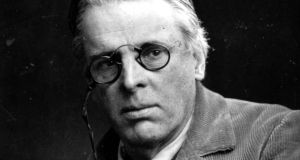 The French diplomat who was dispatched to Roquebrune-Cap-Martin to locate the remains of William Butler Yeats nine years after the poet’s death reported that the task was impossible and recommended reconstituting a skeleton from bones in the local ossuary.

It is not known what was put in the coffin that was welded shut in the presence of six Frenchmen on March 20th, 1948, but correspondence between French diplomats strongly suggests it was not the complete remains of WB Yeats.

No family member or Irish official inspected the contents of the coffin that was buried in Drumcliffe churchyard in Co Sligo six months later.

The authenticity of the remains has long been questioned, but the French diplomatic documents, recently discovered in a trunk that was stored for 62 years in a chateau in southeastern France, indicate they are unlikely to be Yeats’s bones.

“It is impossible to return the full and authentic remains of Mr Yeats,” the diplomat Bernard Cailloux wrote in early 1948. It may be possible to return an iron corset, a skull, and perhaps a Bible. In the event that the return of these objects would be insufficient or that it would be indispensable to return a body, Mr Rebouillat, sworn pathologist in Roquebrune, would be able to reconstitute a skeleton presenting all the characteristics of the deceased.”

The same Rebouillat who had been recommended by Cailloux certified that Yeats’s remains were identified “with certainty and precision”.

Cailloux had reported that the poet’s remains were “mixed pell-mell with other bones” in the ossuary.

“Certain precautions must be taken on our side to avoid any indiscretion about the procedure undertaken a few months ago to gather the mortal remains of the poet,” Ostrorog wrote to Paris.

Seán MacBride, who was then minister for foreign affairs, also thanked Ostrorog. “We understood each other without it being spelled out,” the French diplomat said.

The poet’s grand-daughter Caitríona Yeats did not wish to comment. She referred to the October 6th, 1988 letter to The Irish Times by Yeats’s children, Anne and Michael, in which they defended the role of their mother, George, and expressed total confidence in the French “persons of expert and official standing” who witnessed the removal of the bones.