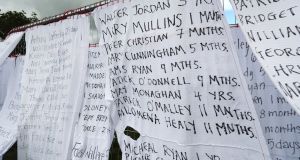 Bed sheets with the names of hundreds of dead children draped on the gates of a mass burial site at Tuam, Co Galway. Photograph: Niall Carson/PA Wire

Survivors of the former Bon Secours mother and babies home in Tuam, Co Galway have described the memo which Minister for Children Katherine Zappone gave to Pope Francis on the issue as a “publicity stunt”.

In a strongly worded statement, the Tuam Home Survivors Network also accuses Ms Zappone of being responsible for a “dishonest exercise” over the future of the former home site which, it says, has delayed exhumation of infants’ bodies and “prolonged the agony of survivors”.

The group was responding to Ms Zappone’s request to the pope that the Catholic Church should “contribute substantially to the cost” of reparation involving the Tuam home site.

This should be done “willingly, unconditionally and quickly”, as nothing else would demonstrate “remorse”, Ms Zappone said in a memo given to the pope at the weekend.

Ms Zappone has signalled that the Government will take a decision soon on the future of the former home site, where the State’s Commission of Investigation, which was set up to examine the actions of 18 State-linked religious institutions, confirmed in March 2017 that it had discovered “significant quantities” of infant bones.

The test excavation work was conducted from late October 2016 after historian Catherine Corless had traced 796 death certificates for infants at the home, but no medical or burial records for same.

Ms Corless and home survivors believe full exhumation and DNA analysis is necessary to establish the precise numbers who may have been buried in an area used as part of a sewage system, and she says some may also have been given for adoption after death certificates were falsified.

The Tuam Home Survivors Network, chaired by former Tuam inmate Peter Mulryan, says Ms Zappone “attempts to maintain the myth that she, with her Cabinet colleagues, can decide the future of the mass grave at Tuam”.

“To be clear once more, the only office-holder with jurisdiction over the mass grave at Tuam is the local coroner,” the network says, but the coroner has so far failed to convene an inquest.

Where a coroner fails to do so, the network says, the Attorney General can appoint another, but this has not yet occurred.

The network points to a lost opportunity to “speedily accomplish” an exhumation during the “warmest and driest summer for 40 years”.

An expert technical group commissioned by Ms Zappone has outlined five options for the Tuam site, ranging from erecting a memorial to full exhumation, and a consultation on these options by Galway County Council reported a difference of opinion between survivors and relatives and local residents living in houses built on and around the grounds of the former home.

The survivors’ network notes Ms Zappone’s reference in her memo to the church contributing substantially to “the cost of whatever option is decided by the Government”. The network says the Government “does not” have that power.

“There is no option, other than to convene an inquest and complete an exhumation,” the group says, and states that the Bon Secours order has obligations.

“Can the Minister produce a single piece of correspondence between her or her office, written to the Bon Secours order, since she became Minister, pointing out their obligations to them?” the network says.

A spokesman for Ms Zappone said she would be making no comment on the network’s statement.

There was no response to a request for comment by the Bon Secours order.