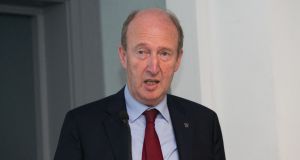 Minister Ross: regretted “that a sensitive and confidential report” which he had “commissioned on foot of an interim recommendation from the AAIU had been leaked”. Photograph: Gareth Chaney Collins

Minister for Transport Shane Ross has pledged to implement the findings of an independent review which is believed to have identified “confusion” and “potential conflicts of interest” among State agencies in relation to oversight of civilian air-sea search and rescue.

However, Mr Ross said he would only publish the report and “ensure that the recommendations are implemented” once the State’s Air Accident Investigation Unit (AAIU) had been given time to consider it.

The AAIU is currently working on its final report into the loss of four air crew – Capt Dara Fitzpatrick, Capt Mark Duffy and winch team Paul Ormsby and Ciarán Smith – in the Irish Coast Guard off north Mayo in Mayo in 2017.

In its interim report on the crash, the AAIU recommended that Mr Ross carry out a thorough review of search and rescue aviation operations in Ireland.

The team was given a deadline of last month. It has no role in investigating the cause of the Rescue 116 crash.

RTÉ reported on Friday that the international review identified “several sources of confusion and potential conflicts of interest that have resulted in a lack of shared understanding of roles and responsibilities” among the agencies overseeing rescue operations.

RTÉ said it recommended that the Department of Transport “clearly assigns the Irish Aviation Authority (IAA) with responsibility for the “legal oversight” of civil search and rescue”.

In a statement, Mr Ross said he regretted “that a sensitive and confidential report” which he had “commissioned on foot of an interim recommendation from the AAIU had been leaked”.