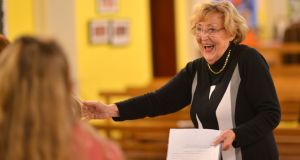 Ms Norton gave her name to one of the State’s foremost theatre schools, The Betty Ann Norton Theatre School in Rathmines, Dublin.

For more than 60 years Ms Norton educated legions of school children and launched the careers of many television and stage stars as well as writers, producers and directors.

President Higgins said her legacy as “one of our foremost theatre teachers is a formidable one” and will live on “through her life’s work of nurturing a love of theatre across so many generations”.

“The best tribute to her memory is to support artists in their campaign to live, and continue at this difficult time for our theatres, our cultural spaces and all those who work within them,” Mr Higgins said.

“There is no doubt this sad passing of a theatre legend will be so much more keenly felt during these uncertain times when the space of culture has been threatened by Covid-19 and the adjustments to it, not only in Ireland but throughout the European Union.

“The secret of life is to know what you want,” she said in an Irish Times interview in 2001. “I’ve always known that I wanted to teach voice and acting.”

For many years Ms Norton was based in Harcourt Street, where she was described as filling “the high, bright rooms of her theatre school . . . with energy, spreading passion generously and infectiously”.