Gang thought to have cut power and stolen in region of €20,000 at Co Clare tourist site 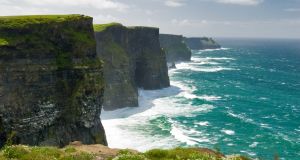 A gang is understood to have cut power to The Cliffs of Moher Visitor Experience in Co Clare, which disabled its security system and allowed them to access the premises. Photograph: iStock

A sophisticated gang is suspected to be behind a burglary at one of Ireland’s leading tourist attractions in the early hours of Monday morning.

The gang is understood to have cut power to The Cliffs of Moher Visitor Experience in Co Clare, which disabled its security system and allowed them to access the premises.

A large cash amount, thought to be in the region of €20,000, is also understood to have been taken from the centre in the incident.

It is understood specialist equipment may have been used to cut power to the centre, which was closed for a number of hours as a crew from ESB Networks worked to restore power.

While the cliffs themselves were officially open, all facilities were off-line. Management released a statement on Monday morning urging members of the public not to visit the site.

The Cliffs of Moher Visitor Experience is Ireland’s second most popular tourist attraction after the Guinness Storehouse in Dublin.

General manager Katherine Webster confirmed gardaí were investigating a suspected break-in and work was ongoing to repair a power outage.

The incident is being investigated by gardaí in Ennistymon.