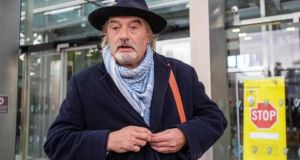 Ian Bailey was convicted in his absence in France in 2019 of Sophie Toscan du Plantier’s killing. Photograph: Paul Faith/AFP via Getty

A lawyer acting for the family of murdered Frenchwoman Sophie Toscan du Plantier has urged the Minister for Justice to appeal a High Court decision not to extradite Ian Bailey to France to serve a sentence for the killing.

Alain Spilliaert said that having studied the judgement of Mr Justice Paul Burns on the matter earlier this month, he believed that there were at least three good grounds for appealing the decision not to extradite Mr Bailey to France.

Mr Justice Burns rejected the State’s application to extradite Mr Bailey, ruling his surrender is precluded under Section 44 of the European Arrest Warrant Act 2003 as Ireland does not have reciprocal legislation to France on the issue.

He also found Mr Bailey’s surrender was prevented because of an “accrued or vested right” he had acquired on foot of previous judicial rulings by the Supreme Court in 2012 and the High Court in 2017, prohibiting his surrender.

But Mr Spilliaert told The Irish Times that he believed it was important that the Minister for Justice appealed Mr Justice Burns’s ruling for a number of reasons including the fact that there was a public interest element to the case.

“Back in 2011 after the French justice system issued the first European Arrest Warrant for Mr Bailey in 2010, Mr Justice Michael Peart granted extradition but he allowed Mr Bailey’s lawyers an appeal to the Supreme Court.

“Mr Bailey is now convicted in France so we believe our case is stronger plus Ireland introduced legislation in 2019 that extended the remit of Irish law to include people ordinarily resident in Ireland as well as Irish citizens.”

Mr Spilliaert said he was encouraged also by the fact that Mr Justice Burns ruled against an argument made by Mr Bailey’s lawyers that to seek his extradition now amounted to an abuse of process given previous rulings.

He noted Mr Justice Paul Hunt had ruled in 2017 that a second European Arrest Warrant issued by the French authorities in 2016 was an abuse of process in that the circumstances of the case had not changed from 2012.

But he pointed out that Mr Justice Burns had found that while Mr Justice Hunt was correct in his ruling in 2017, the circumstances were now changed due to Mr Bailey’s conviction in absentia in France in 2019 and new Irish legislation.

He said he believed it was also important the matter be appealed in the light of suggestions by the State in support of its application that the European Court of Justice be asked to rule on the interpretation of the extradition law.

“Mr Justice Burns devotes only eight lines to the issue of referring a question as to the definitive interpretation of Article 4.7 (b) to the European Court of Justice in Luxembourg despite the State arguing for it in its submission in July.”

He said Robert Barron SC for the State had argued the European Court of Justice should be asked how exactly Article 4.7(b) should be interpreted in terms of any reciprocity that is required of the executing Member State.

Mr Barron had suggested the European Court should be asked if reciprocity required verification that it was not only possible generally but also specifically in this case to prosecute an offence committed outside its territory.

“Mr Justice Burns said he didn’t think it necessary to refer the question to the European Court of Justice because he had already refused surrender on other grounds but we believe it is fundamental to how the law is interpreted.

“For all these reasons – the public interest element, the finding by Mr Justice Burns the new warrant was not an abuse of process and the issue of Article 4.7(b), we believe the State should appeal the decision to the Supreme Court.”

Mr Bailey, who was convicted in his absence in France in 2019 of Ms Toscan du Plantier’s killing, has repeatedly denied any involvement in her murder and has never been charged in Ireland in relation to her death.