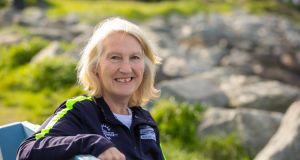 Breda Flood in Co Wexford, a long-time severe asthma sufferer, has had to miss her beloved GAA games due to the air quality in Enniscorthy. Photograph: Patrick Browne

In the winter mornings of 1980 when Dublin was regularly enveloped in smog, Prof Luke Clancy would get up and drive from his home in Sandymount to St James’s Hospital. As the suburbs gave way to the city, the smoke thickened.

But it was far more than a lack of visibility that began to disturb Prof Clancy. His patients were dying at a disturbing rate in the deep winter months when black vapours filled the sky and plumed in through the hospital windows.

“Patients were dying whom I expected to live. I was really flabbergasted. We were doing all the right things and yet they were dying,” he says. In fact, recalls the consultant respiratory physician who had recently returned from working in the UK, twice as many people as expected were succumbing to heart and lung illness. The answer to the mystery hung in the air.

Although Prof Clancy would face pushback from the political establishment, industry and even his own colleagues, he would go on to campaign for a ban on smoky coal that would, when introduced a decade later, save many lives.

A paper he co-authored on the experience at his hospital identified “excess mortality” in the winter of 1981-1982. It peaked in January with 120 deaths compared with a monthly average of 54 and a January mean mortality rate of 64.

The major cause of death was respiratory in nature – no bacteriological or viral epidemics had occurred. At the same time, there were reports of increasing air pollution.

“I was looking at 100 excess deaths in James’s [during winters in the 1980s],” he says. “I looked at the excess deaths in other hospitals and it had doubled and nobody even noticed. Old people were dying [and the view was] ‘Sure, they do die.’”

Poor air quality has serious short and long-term health implications. The main source of it in Ireland, according to the Environmental Protection Agency (EPA), is solid fuel burning which emits PM2.5 particles.

In Dublin, increasing use of smoky coal was blamed for the fog. Prof Clancy says that in the city much of this was due to the fitting of fireplaces in corporation housing as a response to the Middle East oil crisis of the previous decade.

An article in The Irish Times in December, 1981, quoted an official from An Foras Forbartha who said the switch from oil to coal and peat in the capital led to a 45 per cent increase in smoke levels in the winters between 1978 and 1980.

Linking this phenomenon to a deterioration in public health, Prof Clancy set out to campaign for the coal ban. His views were dismissed as being based on unproven science, and the assumption of extremely costly solutions. However, buoyed by public support, prohibition was ultimately introduced in 1990.

A study of its effects published 12 years later in the Lancet medical journal, of which Prof Clancy was the lead author, established major and virtually instant health benefits. 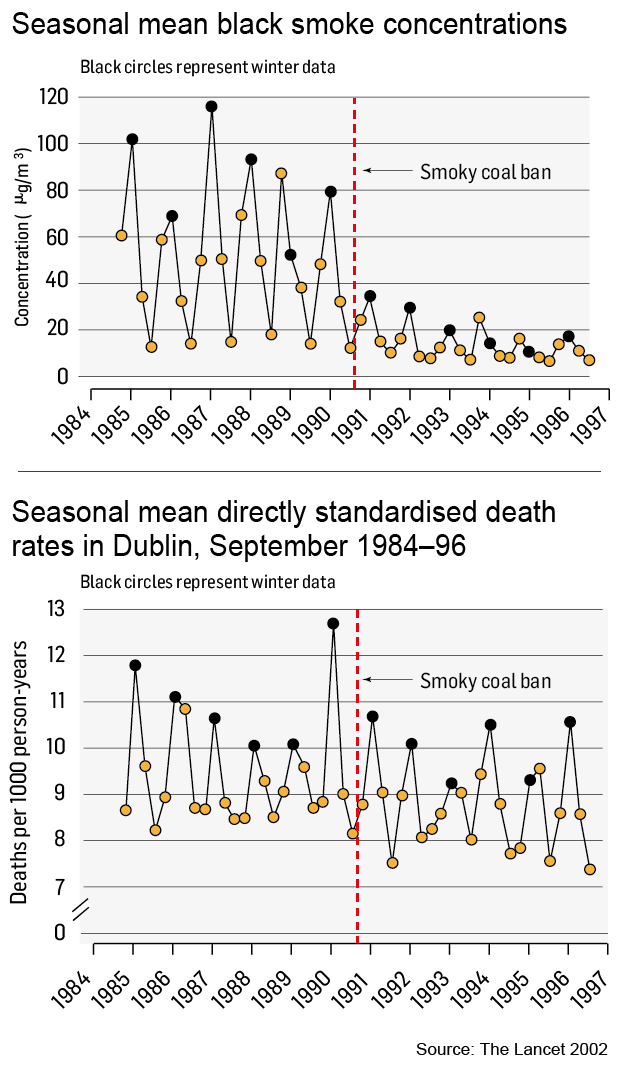 It found there were about 116 fewer respiratory and 243 fewer cardiovascular deaths a year, much higher rewards than predicted. Non-trauma age-standardised death rates decreased by about 5.7 per cent in the 72 months after the ban compared with the same period before.

“We adjusted death rates in Dublin county borough for those in the rest of Ireland,” the paper stated. “Results of these regression analyses show that there were substantial reductions in Dublin death rates after the ban on coal sales, even after adjustment for measured causes of death [climate and respiratory epidemics] and long-term national trends in mortality and its risk factors.”

Average black smoke concentrations in Dublin declined by 70 per cent.

Today, Prof Clancy says the paper – the first of its kind in this area of pollution – has been cited about 8,000 times and is used in China by those seeking to justify controls on air pollution.

The Asthma Society of Ireland says the ban has resulted in more than 350 fewer annual deaths.

Asthma rates in Ireland, which had been rising in the 1980s and 1990s, have begun to fall – a pattern that can, to some degree, be traced back to the ban and general overall improvement in air quality.

“Particularly in babies and young children [whose] lungs are far more susceptible to pollutants,” he says.

Doctors in practices and emergency departments, he added, are noticing fewer cases of COPD (chronic obstructive pulmonary disease) and the use of nebulisers in medical settings has declined substantially since the 1990s.

Prof Clancy stresses that his calls for the ban were ultimately successful because they rode on the tide of public awareness and support. Long gone are the smog-filled mornings and the days when families, as he describes it, huddled around open fires burning coal, their only source of heat in severe Dublin winters.

“People die and they die from different things,” he says today, “but they aren’t dying from smog.”

On a winter’s evening at the top of Enniscorthy town, the sound of battling GAA players can be heard under the lights. But the Oulart the Ballagh pitch at Bellfield is at a high elevation, meaning whatever smoke is in the town curls its way up among the action.

Enniscorthy is one of the next string of towns due to benefit from a ban on smoky fuel, with the ban being extended to all cities and towns with a population of more than 10,000 from September 1st, 2020. Breda hopes it might free her beloved GAA pitch of its marauding pollution, and her of the need to keep away.

“It’s like the shape of a cauldron,” the retired school principal says of the local geography, “and with the smog, it definitely hasn’t been a comfortable location, I avoid going there.”

In the past Breda has attended games but remained inside a building at the grounds, the enemy outside. She likens it to standing beside someone smoking a cigarette, the threat of a sudden change in her breathing.

“I would feel unsafe,” she says simply. The feeling is like an irritating cough that will not go away.

In 2019, the Gorey Guardian newspaper reported that the absence of a smoky coal ban in the county’s towns could prove fatal to those suffering from respiratory problems. Wexford County Council’s senior executive environmental scientist, it said, warned of the dangers of going outside in New Ross, Enniscorthy and Gorey on cold, frosty nights when people burn the fuel.

Although she lives in a rural area near Enniscorthy, Breda knows all too well about the threat of the urban centres. Having been diagnosed with asthma in 1984, the condition has had a major impact on her life. She hopes the ban in September will address much of the threat.

“Enniscorthy was a particular black spot because they didn’t have the smoky coal ban,” she says of her activities there. Last year she organised the Darkness Into Light walk for mental health awareness in the town but was unable to take part, opting instead for an alternative in nearby Courtown on the breezy coast.

“I was lucky that I didn’t live there [Enniscorthy] and I was able to come home to a rural base. I do know some people with asthma who live there and it’s been very difficult for them. It’s just one part of the equation, just one extra burden.”

She believes that because of the coronavirus pandemic, people may get a better sense of what it is like to have to constantly consider where you should and should not go. But when the coal ban comes in, the winter evening GAA games will still be there. And she hopes to go and watch.