Killarney scenes: Harris says there will always be people ‘who do stupid things’

Kerry TD Michael Healy-Rae says all pubs, not just ones that serve food, should reopen 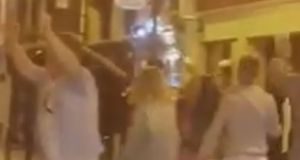 A screengrab from one of the videos that claims to show a group of people singing and dancing on the streets of Killarney on Saturday night. 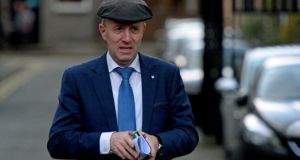 Minister for Higher Education Simon Harris has said there will always be people “who do stupid things” in reference to drunken scenes on the streets of Killarney at the weekend.

Video footage on social media showed a group of people chanting and drinking on the street without observing social distancing or wearing masks. Two men also climbed on top of a old phone box and started a singing, the video shows.

Society shouldn’t lose sight that the majority of people are doing everything that has been asked of them, Mr Harris told RTÉ radio’s Today with Claire Byrne show.

Hesaid it was not one generation, young people, who were the issue. “There were no students in Clifden.”

Most students are responsible and were concerned about the health of their parents and grandparents, he said.

There will be strict rules when students return to college, but it will vary from institution to institution. The priority will be first year students, said Mr Harris.

Mr Harris said last week had been a terrible week. He had made his feelings known on social media with comments about “stupid acts that make people angry.”

What had happened in Clifden was a breach in public trust. “We had worked so hard to bring people with us, that everyone had put their shoulder to the wheel.”

What had happened in Clifden had created an “us versus them” attitude “that we just can’t have.” Mr Harris acknowledged the message had gotten more complex to communicate.

‘All pubs should open’

Independent Kerry TD Michael Healy-Rae said scenes of people drinking on the street in Killarney last Saturday night would not have happened if all pubs were open.

What had happened on Saturday night was not representative of what happens in Kerry, Mr Healy-Rae told RTÉ radio’s Morning Ireland.

Mr Healy-Rae said the incident on Saturday night did not occur inside a pub. “This was not inside any public premises, because our publicans that are opened they run exceptionally efficient businesses, very well controlled, they are adhering to all the guidelines and they’re doing everything correctly.”

Under coronavirus restrictions, pubs which do not serve food must remain closed to help suppress the spread of the virus. Several proposed reopening dates have been pushed back by the Government following advice from public health experts.

Mr Healy-Rae said the scenes in Kerry over the weekend would not have happened if all pubs were open.

“That is why I would use that scene in Killarney on Saturday night as an argument in persuading Government to allow all public houses to open. Because if our public houses are open, people will get alcohol in a measured and principled way, by responsible people who go before our courts every 12 months and who run what I call respectable public houses.”

He said he was “advocating that all pubs should be open, not just ones who serve food”.

Mr Healy-Rae acknowledged that his brother Danny runs a pub, but said that everyone in this country was entitled to their opinion.

“I don’t agree with the public health advice, no one can go into detail about what is the difference between a wet house and one serving food. There are a lot of anomalies. Of course I will adhere to and go along with the advice, but that doesn’t mean to say that I have to blindly agree and say they’re 100 per cent right in everything they say. That is not life.”

HSE chief executive Paul Reid said while the scenes on the street in Killarney at the weekend were unfortunate, he did not want to see young people being blamed and targeted.

There needed to be a redoubling of efforts to win their hearts and minds, he told Newstalk Breakfast.

“As we head into the winter we need to be communicating to people with hope and confidence,” Mr Reid said.

There was no doubt that there had been an impact on services to date, but they will now have to be delivered in a new way, protecting the vulnerable and relieving pressure on the hospital system, he said.

Agreements have been reached with private hospitals he said in the event that their facilities and services will be required in the event of a second surge. This will be done in a targeted way, it could be based on geography and will be a “more agile” way, he explained.