Programme to celebrate 100 years since women got vote launched 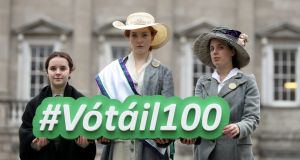 A year long programme of events has been launched to mark 100 years since women got the vote.

There was standing room only in the AV room in Leinster House for the launch which was attended by dozens of serving and former women TDs and senators.

Among the former TDs who attended were Nora Owen, Monica Barnes and Gemma Hussey.

Women were first granted the vote under the Representation of the People Act in 1918 which became law on February 6th, 1918. It greatly expanded the franchise for both men and women precipitating Sinn Féin’s landslide election victory later that year.

Even then the franchise for women was limited to those over 30 who were property holders or had a university degree.

Vótáil 100 was set up by a cross-party group of six female members of the Oireachtas to co-ordinate the programme.

Historical advisor Sinead McCoole said there had been debates during the decade of centenaries as to whether or not certain events should be celebrated or commemorated.

In the case of women getting the vote, it should be a celebration, she stated.

Though there were more women now in both houses of the Oireachtas, 35 in the Dáil and 19 in the Seanad, they were still under-represented, said Vótáil 100 chair Senator Ivana Bacik. They represented 22 per cent of all TDs and 32 per cent of all senators.

“We need to do a lot more to get women to stand for election and become more active in politics,” she said.

A portrait of Constance Markievicz, the first female MP to be elected, will be presented to the speaker of the House of Commons, John Bercow, by the Ceann Comhairle Seán O’Fearghaíl on February 28th. It is by the Polish artist Boleslaw Szankowski and currently hangs in Áras an Uachtaráin.

The presentation will be made in the House of Commons - ironically a place where Markievicz refused to take her seat after being elected in the British general election of December 1918.

Markievicz was not only the first female MP to be elected, but the only one in that election. She will the subject of an exhibition beginning on October 27th, 2018 which will run until St Patrick’s Day 2019.

A group portrait of all the women members of the Oireachtas will be unveiled on International Women’s Day 2018 which is on March 8th.

The events will begin with an academic conference in the Royal Irish Academy on February 1st reflecting on the Representation of the People Act 1918.

One of the highlights of the year will be a youth debate in Seanad Éireann on April 17th.

Senator Gabby McFadden, one of the organisers of Vótáil 100, said there has already been 350 applications for the youth debate.

“Irish politics has come a long way since 1918,” she said. “as we enter the most sensitive, fractious issue of modern times, the Repeal the Eighth, we need the values of communication, mutual respect and compassion more than ever. These are some of the values that women bring to politics.”

The Houses of the Oireachtas will play host to an exhibition of artefacts, images and ephemera celebrating the long struggle for female suffrage from June until September.