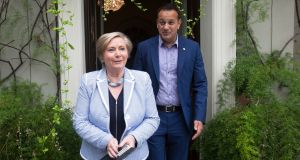 Legislation to introduce two weeks paid paternity leave for fathers is expected to be passed before the Dáil summer break, Minister for Justice Frances Fitzgerald has said.

Speaking with Minister for Social Protection Leo Varadkar at Farmleigh, in the Phoenix Park, Dublin on Sunday, Ms Fitzgerald said the legislation, due to be published on Monday, would be discussed in the Dáil at the end of the week.

The plan to introduce paid paternity leave had been welcomed on all sides of the house, she said, and with co-operation, it would get through in time to introduce the payment from September.

All fathers, including the self-employed and those adopting, will be entitled to a social welfare payment of €230 each week for two weeks, under the planned legislation. Men can avail of the payment at any stage within 26 weeks of birth. Some employers may opt to top-up the payment while others will not.

The Government estimate that approximately 30,000 to 40,000 fathers will avail of the benefit in a full year, at a cost of €20 million. To the end of 2016, the payment is expected to cost the excehquer €5 million.

Ireland will be catching up with most other European countries by introducing the measure, which was flagged earlier this year.

Ms Fitzgerald said paid paternity leave was overdue and we were now in an economic position to cover it.

Mr Varadkar said the Government was marking Father’s Day by announcing the publication of the paternity bill on Monday.

Mr Varadkar said fathers would normally have to give four weeks notice before taking the leave, but there will be provision in the legislation for leave at short notice, should a baby be born early.

“It [the legislation] also applies to adoptive fathers and same sex couples too,” he said.

Asked if it was possible a self-employed father could claim the payment without taking the leave, he said there was always a risk that a fraud could occur.

“Obviously we’ll be putting in place measures to avoid that,” he said.

Self employed fathers could take time off whenever they wished, but didn’t, largely due to the loss of income and business, he said. Paid paternity leave would give them a guaranteed income which would hopefully “tip the balance” for self-employed dads.

Asked if there were any plans to allow men and women split maternity leave evenly, as happens in some European countries, Mr Varadkar said it was important there was some form of dedicated maternity leave for medical reasons.

The minister also said he would be introducing a statutory instrument, secondary legislation that does not require Dáil approval, to waive the €20 cost of birth certificates for still born babies.

He said he would also be introducing legislation to waive the cost of birth certificates for neo-natal deaths, though this would be more complex.