Northern parties closing in on elusive deal this week 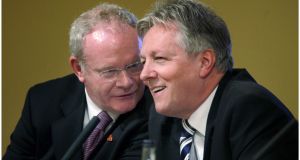 Northern Secretary Theresa Villiers has said it is “make your mind up time” for the northern parties as they try to bridge final differences holding up a comprehensive deal to stabilise the Stormont institutions.

First Minister Peter Robinson and Deputy First Minister Martin McGuinness expressed confidence that the British and Irish governments and NI’s five main parties will sign off on a deal this week, notwithstanding concerns that not all issues will be fully decided.

Ahead of negotiations resuming on Tuesday, Mr McGuinness said the next day or two would be “critical”. He added Sinn Féin was unhappy there were still difficulties over how to establish the truth for victims and survivors of the Troubles.

Sinn Féin and the SDLP have complained the British government could “hide behind the cloak of British national security” to prevent the truth emerging in relation to British state killings and collusion.

“The British government are trying to hide behind this label of national security and I think we need to see a resolution of that and I believe the discussions . . . will probably concentrate on that more than anything else,” said Mr McGuinness.

“In other matters great progress has been made between ourselves and the DUP. This is really a sticking point which revolves around the approach of the British government.”

Ms Villiers acknowledged the legacy issue is not resolved: “It continues to be a significant sticking point. We will continue working on it.”