Newgrange magic felt even as sun fails to light up chamber

A misty morning at Newgrange in Co Meath prevented the sun from illuminating the ancient chamber on the Winter Solstice. Several hundred people watched from outside, while 50 people waited inside for sunlight to fill the tomb’s main passageway. 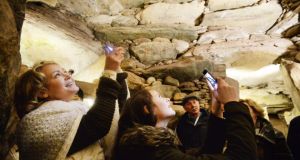 Deirdre and Amber Hogan from Co Wicklow, part of the group in the chamber at the Newgrange Monument on the morning of Winter Solstice for sun rise. The inclement weather obsqured the sunlight from entering the chamber. Photograph: Alan Betson/The Irish Times 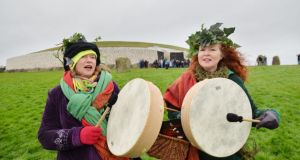 Sherrie Scott from Co Donegal and Karen Ward from Smithfield, Dublin, visitors to the Newgrange Monument on the morning of the Winter Solstice. Photograph: Alan Betson / The Irish Times 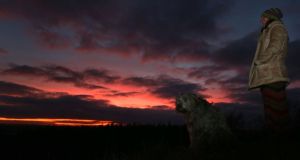 Shirley Finn with her dog Nin, watches the sunset at Dowth, in Co Meath on Saturday ahead of the Winter Solstice. Photograph: PA 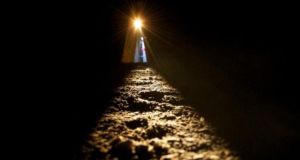 A file image from last year showing the sun shining along the passage floor into the inner chamber at Newgrange during the Winter Solstice. The passage tomb in Co Meath was built over 5,000 years ago. Photograph: Alan Betson/The Irish Times

It did not go quite as exactly to plan. The absence of stars in the Saturday night sky during the early hours hinted at what was to follow. But hope emerged as the tentative breeze seemed to gather momentum shortly after 6 am.

There seemed a slight chance that it would banish the cloud cover, leaving the horizon clear for the sun to make its flamboyant appearance. All things considered, it is always that little bit more dramatic when the sacred light so revered by ancient man bursts through the nocturnal murk rewarding the faithful solstice-watchers with the assurance that the longest night is finally over and that winter is beginning its slow demise.

Thanks to the increased traffic restrictions parking was much further away than usual. Many Newgrange pilgrims began their walk towards the world famous Co Meath late Stone Age monument unaware that a 4km stroll stretched between them and the site. A man, wearing a three-piece suit and shiny city shoes, who seemed thrilled at the idea of having left Dún Laoghaire “at about 5.30 am” assured his teenaged son that it was just around the corner.

“You already said that”, snarled the youth, “about 5 times.” The father laughed nervously, conscious other walkers were listening, and promised the boy breakfast.

“I could have had that at home, instead of being dragged here to see a bunch of weirdo hippies chanting and moaning and hugging each other.” A youngish woman overhearing the exchange hissed “spoilsport”, intending to be heard but she did walk on that bit faster.

It is true that there is something magical about gathering in the darkness, even if it’s not exactly the middle of the night, just a bleak winter’s morning. The solstice creates its own communal festival atmosphere, if one laced with a sense of purpose. Everyone present wishes to bask in a golden beam and feel that unique Solstice sun on their cold face. A group of dogs, some wearing Santa hats and red vests, were gathered at the gates. “Ah water protesters” announced a local woman, “don’t they look sweet!” But the dogs were not protesting. Their expressions ranged from philosophical to knowing. Banned from the site, they were tied to the perimeter fence, waiting for their humans to reappear.

No snow, no ice, not even rain, the grey light brightened over a landscape that has been farmed for at least 5,000 years. The wind had dropped causing the banners to flutter lamely in genteel furls. Some of the solstice watchers formed into two large hand-holding circles, one slightly smaller than the other, moving within the larger one. A low sustained humming rose skywards; beseeching the ancients to intervene and summon the sun god. Solitary figures stood with their backs to the great mound, their eyes closed, waiting, if they prayed sufficiently intently, for the miracle that might still happen, and had, only the morning before.

Barely the thinnest ribbon of pink was spotted but it had no effect on the dull green of the fields across the valley and it vanished. A little terrier darted towards the crowd. Having chewed through the leash, Lucky, the dog, a study in tenacity, quickly found his family. “If Lucky is good enough to cheer up the patients in the hospital, why shouldn’t he be here?” reasoned his owner. Lucky agreed and quivering with entitlement, waited to be patted.

It was ironic, considering the glorious sun rises of late, the second and third mornings of this year’s Solstice cycle were magnificent and tomorrow, Monday’s, is expected to be impressive, that Sunday was to prove overcast. The colder it happens to be, the better. Mild, damp mornings are unpredictable. All gazes were directed at the horizon. Meanwhile, the River Boyne resembled a sleek silver muscle as it flowed serenely towards the distant sea.

Cameras clicked. Strangers were asked to photograph groups of friends. The Reindeer antler hat was the preferred headwear. Anxious minutes ticked by and fragments of overheard conservations were dominated by rueful comments about how brilliantly the sun had shone on Saturday morning. Then the vigil was over.

Inside the monument though, beneath the corbelled ceiling of layers of stone, there was sufficient magic to be had, even if the assimilated lightshow was courtesy of electricity not nature. Liam Durkan from Dunshaughlin School was on a mission. With a project to write, he was interested in the passage and as he stood in the chamber, he enthusiastically asked a few questions about the roof box. “You’ve done your homework” remarked the OPW guide. The boy smiled. Then there were happy birthday greetings for an 85-year-old local woman who had first come to Newgrange to celebrate her 80th and has continued the practice every year since.

Sunrise on Solstice Sunday was indeed a private event, occurring behind the screen of cloud. Yet no one present could dispute the guiding presence of Stone Age man as his eager descendants participated in the ancient ritual of honouring the sun which can prove a most capricious orb. But when it chooses to grace Newgrange during the Solstice it brings an unforgettable and precious light that is like no other. Whether the sun shines or the rains fall today, tomorrow and the next day, one thing is certain - Winter’s gradual retreat has begun.