Locals disappointed at sanction on Shell for gas flaring 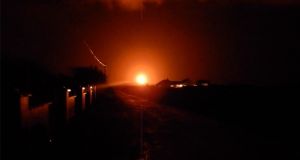 The multinational was fined €1,000 and ordered ordered to pay €15,000 in legal costs in relation to causing light and noise pollution from a gas flare during start-up testing at the Corrib gas terminal in Co Mayo on December 31st and January 1st.

The company pleaded guilty at Dublin District Court on Monday to breaching two parts of its industrial emissions licence, which had been awarded for project last year by the Environmental Protection Agency (EPA).

Shell to Sea in Mayo said it estimated the €1,000 fine was equivalent to “65 seconds’ worth of current Corrib sales revenue”.

It said it based its calculation on a recent statement from Corrib gas partner Vermilion to the effect that the Mayo plant had reached full capacity, and an estimate that sales revenue had reached more than €240 million so far this year.

Rossport resident Mary Corduff said the fine was “no deterrent”, and the court outcome “does not make us feel any safer”.

“The EPA licensed this, and we have no confidence in any independent monitoring,” Ms Corduff said.

“We have recorded flaring on and off here for months since the first testing in November, 2014, and it has been continuing,” Ms Corduff said.

Farmer Gerry Bourke and Glengad resident Diane Taylor had both witnessed burning smoke and a ball of fire which “lit up the sky” for about 30 or 40 minutes on December 31st last, and which was accompanied by a “low loud rumble like a supersonic boom”.

Consent to operate the refinery had been signed by former energy minister Alex White two days before, on December 29th, 2015.

Flaring or burning off of gas to relieve pressure in the system contributes to greenhouse gas emissions.

The emissions licence for the project stipulates it should only be used for safety reasons or non-routine operational conditions.

Ms Taylor questioned why no one from the EPA had contacted her during its six-month investigation.

“Clearly, the EPA did not look very far during its inquiry, and it is a pity that the fine was not a thousand times higher,” Ms Taylor said.

She said residents had no independent number to contact when and if they had safety concerns.

Mr Bourke questioned the frequency of the flaring, and said text alerts to residents about this were sporadic.

“My main concern is why this incident happened on New Year’s Eve, and is it likely to happen again,”he said.

Shell said in a statement that it accepted the court findings.

“ The flaring was specific to the start-up of the gas wells in the Corrib field and the testing process to ensure that the gas was the correct specification for use in the national gas network,” it said.

“ In January, we wrote to the local residents and the wider community to apologise for the disturbance that was caused,” the company said.

The EPA said its emissions licence carries conditions to regulate the environmental impact of the gas refining activity.