‘No grounds’ for saying inquiry would prejudice appeal or future investigations 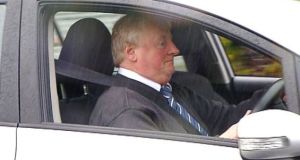 Bill Kenneally has pleaded guilty to 10 sample counts that he indecently assaulted 10 boys between October 1984 and December 1987.

Lawyers acting for six men abused as boys by a sports coach in Waterford in the 1980s have called for the immediate start of an inquiry into the investigation carried out by An Garda Síochána at the time.

Bill Kenneally from Laragh, Summerville Ave in Waterford was sentenced to 14 years in February 2016 after pleading guilty to 10 sample counts that he indecently assaulted 10 boys between October 1984 and December 1987.

Last April, the then Minister for Justice Frances Fitzgerald announced that a Commission of Inquiry would take place into the handling of the case by state agencies including the gardaí, as well as church and other figures.

A month later, retired circuit court judge Barry Hickson was appointed to lead the inquiry, though a stay was put pending Kenneally’s appeal against severity of sentence and an investigation by gardaí of new complaints,

Now, the men’s solicitor Darragh Mackin has written to Mrs Fitzgerald’s successor, Charlie Flanagan, urging him to begin the the inquiry as a matter of urgency. If not, his clients may seek a High Court judicial review.

Kenneally’s conviction was prompted by a complaint by Jason Clancy. Together with five other victims, he lobbied for a inquiry after it emerged that gardaí knew of sex abuse complaints against Kenneally dating back to 1987.

The Department of Justice was wrong to put a stay on the inquiry because Kenneally has lodged an appeal, argues Mr Mackin, pointing out that he is only appealing against severity of sentence so no evidence will be reheard.

The gardaí are investigating three more complaints against Kenneally, he acknowledged, but Mr Flanagan has not explained how an inquiry into a past investigation could prejudice a criminal investigation.

“There remain no live prosecutions. Therefore it is submitted that the decision as to whether such prejudice exists should be not be grounded on the basis that there may be further prosecutions,” said Mr Mackin.

Saying that it is “imperative” that the inquiry begins, the Belfast solicitor said steps can be taken to ensure that the investigation does pose any risk of prejudicing an ongoing criminal investigation.

Key evidence has already been lost following the death in February of Kenneally’s uncle, Monsignor John Shine, just three weeks after he had told victims that he would be prepared to meet with them to share anything he knew.

3 Restaurants and bars could stay closed until the end of May, says Taoiseach