Brazilian-born architect ‘built magnificent buildings . . . and touched all who knew her’ 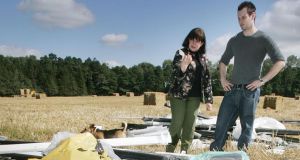 Lady Dunsany Maria Plunkett, who has died of Covid-19, with her son Randle in Dunsany Castle grounds, Co Meath, in 2007. Photograph: Alan Betson

Lady Dunsany, Maria-Alice De Marsillac Plunkett, has become one of the latest victims of coronavirus, her son, Lord Dunsany, Randal Plunkett has announced.

The Brazilian-born architect, who had been married to the late Edward Plunkett, the 20th lord, who died in 2011, is survived by her son, two children from her first marriage, and Randal’s younger brother, Oliver.

Paying tribute to his mother, who has been buried on the family’s Meath estate, Lord Dunsany said: “She was an amazing woman, who built magnificent buildings, had amazing stories and touched all who knew her.”

Thanking staff in Our Lady’s Hospital, Navan, who he said had done everything possible to make his mother’s “last few days comfortable”, he went on: “You are truly the best of us.”

Politicians “have really done amazing things and pulled out all the stops to save people in this country”, he said, adding: “This is truly a dark time for our generation and a sad day for me and my family.”

His mother, who claimed to be a descendant of the explorer Vasco da Gama and Alves Cabral, the founder of Brazil, had two children with her first husband before meeting Edward Plunkett in New York.

When the couple came came to Dunsany from New York, she opened the Dunsany Home Collection, a high-end homeware boutique, in the castle. In later years, she cared full time for her husband, before he died aged 71.