Jailed anti-water protesters reported to be on hunger strike 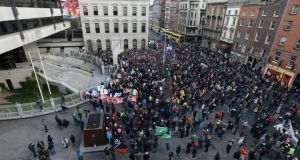 Crowds gather outside the Central Bank in Dublin to protest against the jailing of five anti-water charge protesters. Photograph: Dave Meehan/The Irish Times 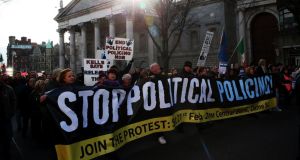 Protesters march from the Central Bank in Dublin to Mountjoy Prison over the imprisonment of five water charges demonstraters. Photograph: Brian Lawless/PA Wire

Two anti-water charge protesters, who were among five jailed last week for defying a court order, have gone on hunger-strike, thousands of people who marched to support them were told today.

Thousands of people, led by the families of jailed anti-water charge protesters, marched through the centre of Dublin on Saturday to a rally at Mountjoy prison.

Audrey Clancy of Dublin Says No, addressing up to 10,000 protesters outside Mountjoy, said Derek Byrne from Donaghemede and Paul Moore from Kilbarrack, had been refusing food since Friday.

The High Court on Thursday imposed a sentence of 28 days for contempt of a court order on Byrne as well as on Bernie Hughes from Finglas and Michael Batty from Raheny, while 56-day sentences were imposed on Moore and on Damien O’Neill from Coolock.

“Derek Byrne and Pauly Moore have stopped eating since yesterday,” said Ms Clancy. “And Derek Byrne has said if he’s not released by Monday he will stop drinking, he will take no fluid intake. These people are putting their lives on the line. Support them. Stop this madness. Get these blood-sucking leaches out of power now. The power of the people is greater than the people in power. Stand up to them, ” she said to cheers and applause.

A spokesman for the Irish Prison Service, asked to confirm whether the two men had refused food, said he could not comment on individual prisoners.

Marchers had come from the Central Bank on Dame Street, about 3km away, carrying placards with such slogans as ‘Joany, call the dogs off”, “Free the five”, and “Stop political policing now”.

Paul Murphy, Socialist Party TD, told the demonstrators the “establishment” was terrified of the anti-water charges movement and was using all “the tools they have” to counter it.

But we’re going win. We’re going to win because of working-class people-power, organisation, mobilisation like today. The fact that so many people came out, maybe 10,000 people, at two days’ notice, that’s a sign that people are reacting, people are mobilising. People know what’s happening is absolutely wrong.”

He said the “use” of media and the legal system to defeat those who would stand up to the “establishment” was not new.

“We need to make sure we defeat the water charges. We need to mobilise all of our selves to convince those in the middle not to pay. Mass non-payment will sink Irish Water. ”

He said the campaign was “no longer just about the water charges”.

“This is about who rules in Irish society. This is about the possibility of a massive left movement in this country for an economic and political revolution. It’s about bringing about, for the first time in this State and together with our brother and sisters across Europe, the rule of the 99 per cent. We can do it. It starts now with getting the release of our comrades, smashing the water charges and bringing down this Government.”

Artist Bobby Ballagh said the jailing of the five was a “scandal” describing them as “ordinary citizens who stood up against the privileged”.

Clare Daly, Independent TD, said the jailing of the five anti-water charge protesters was a “symptom of the State’s weakness, not its strength”.

“We have them on the run. The jailings and the arrests are a sign of utter desperation, an attempt to flip the movement and to frighten the middle ground. We are here to say, ‘they will not succeed’.”

She said the best answer the movement could give was for people to come out in their thousands “in a mass, peaceful demonstration on March 21st”.

Sinn Féin TD Dessie Ellis, described the jailing as a scandal and called for the immediate release of the five anti-water protesters.

“The corrupt politicians, bankers and developers who destroyed the Irish economy have not spent a day in jail,” said Mr Ellis. “But Irish citizens who take a stand against austerity are locked up.”

“Today we say release the prisoners, stop the metering and scrap the charges. Scrap this austerity regime, vote this toxic Government out of office and claim this country back for our people.”

The protest was also addressed by People Before Profit councillor, John Lyons.

“Instead of continuing with the love-in in Castlebar this weekend the Taoiseach would be better placed using his speech to announce the scrapping of water charges,” said Ms Boylan.

“The jailing of water charge protesters is appalling. These are citizens who engaged in peaceful protest as part of one of the biggest mass movements that we have seen in many years.”