Varadkar indicates support package for sector, as demanded by vintners, being prepared

Tánaiste Leo Varadkar has hinted that pubs may remain closed after the August deadline and that he's "looking forward to going to the pub and nightclubs but they're not as important as schools". Video: Enda O'Dowd 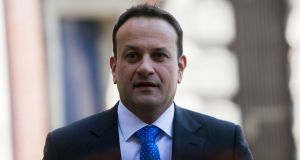 Tánaiste Leo Varadkar said it would be necessary to work on a ‘survival plan’ for industries that have been ordered by Government to stay closed such as pubs. Photograph:Gareth Chaney/Collins

There is growing concern and “scepticism” across the pub trade that bars not serving food will be unable to reopen at the end of the month given the current public health situation, vintners groups have said.

The Licensed Vintners Association (LVA) and the Vintners Federation of Ireland (VFI) said on Wednesday it was “critical” that the Government announces a support package for pubs before the next possible reopening date on August 31st.

They called for a direct financial aid package to be provided if pubs are not allowed to reopen in September and criticised the Government for treating pubs that do not serve food differently to other sectors.

The groups said there was “growing scepticism across the industry” that pubs would be allowed to reopen by the end of the month given the recent rise in Covid-19 cases and concerns that reopening pubs could lead to more infections.

The Government’s decision not to allow pubs to reopen from Monday means 3,500 bars employing 25,000 people will have been unable to trade for nearly half the year, the LVA and VFI said.

Tánaiste Leo Varadkar on Wednesday said he would like to provide additional financial supports to pubs if they are not allowed to reopen at the end of the month.

“If it is the case that we’re saying on the 28th of August that you can’t reopen, I would like to be in a position at that same Cabinet meeting to have a package of additional supports for pubs and nightclubs recognising that they’re a sector that has been ordered by Government to stay closed longer than everyone else,” he told reporters in Dublin.

Mr Varadkar met vintners groups on Tuesday and said he is “sympathetic” to their difficulties and the argument that they need additional financial support.

“In some ways they are being asked to make a sacrifice for the rest of society,” he said. “I love to go to the pub, I’m looking forward to going to the pub again, and nightclubs, but they’re not as important as schools.”

The vintners groups are calling for payments to be offered to pubs that remain closed on the same pro-rata basis as the recently enhanced Covid-19 restart scheme. These payments would range from €270 per week to €1,650 weekly depending on the rateable valuation of the premises and should apply from June 29th onwards, they said. The Pandemic Unemployment Payment (PUP)and Temporary Wage Subsidy Scheme should also be maintained for all closed pubs until their reopening.

All pub licences should also be extended for one year until September 2021, not including licence renewals which gardaí object to in September.

Mr Varadkar said it would be necessary to work on a “survival plan” for industries that have been ordered by Government to stay closed, such as pubs, but including theatres, and also the aviation sector.

“It is becoming increasingly clear that there are a number of sectors that may not be able to operate or open at all for many months,” he said.

“It is my view that those sectors that have been ordered by Government to stay closed, or effectively closed, for reasons of the pandemic will need extra care, extra attention and extra support. Because we want them still to be there when we get through this. And that means a survival plan for those particular industries.”

He said the Government will be working on “particular tailored solutions” for these areas between now and the budget.

A pub support package would ensure “fair and consistent” support for pubs based on a system of payments already introduced by the Government, Donal O’Keeffe said, LVA chief executive.

“These businesses have already been left in the lurch, with their expected reopening twice delayed and no consideration given to helping these pubs and employees who are struggling,” he said. “None of these pubs want to stay closed, but if they have to, then the pub support package removes the income uncertainty, which is currently leaving these pubs at breaking point.”