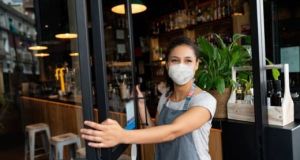 Under a compromise proposal agreed in the Northern Executive, cafes and close contact businesses such as hairdressers and beauticians can open on this coming Friday, while the rest of the hospitality sector will reopen on the following Friday, November 27th. File photograph: Getty

Northern Ireland’s Minister for Health Robin Swann has warned that additional Covid-19 lockdown restrictions are likely to be imposed in Northern Ireland before Christmas.

After a weekend in which 19 more deaths related to the coronavirus were reported in the North, Mr Swann predicted further measures will be imposed before Christmas to try to curb the spread of the disease.

“I think we will be back, the Department of Health, looking for further restrictions and further regulations before Christmas,” he said on Sunday.

There were 10 deaths reported in Northern Ireland on Saturday and nine on Sunday, taking the pandemic death toll to 855.

The health department recorded 511 new cases on Saturday and 472 on Sunday, bringing the weekend tally to 983 and the total of cases so far in the North to 46,831.

Hospital bed occupancy was at 94 per cent, with 415 patients receiving Covid treatment, with 49 of them in intensive care units, and 39 on ventilators.

The overall 7-day Covid figure for Northern Ireland is 215 cases per 100,000 of population.

The Ulster Unionist Party Minister for Health warned of further restrictions following a week of political wrangling over whether the current four-week lockdown should be extended beyond the deadline of Friday just past.

Mr Swann wanted the restrictions extended by two weeks, but after the DUP used its veto in the Northern Executive to block his proposal he “reluctantly” accepted a compromise where the restrictions would continue for a further week, followed by a phased reopening of the hospitality sector.

Under this proposal, cafes and close contact businesses such as hairdressers and beauticians can open on this coming Friday, while the rest of the hospitality sector will reopen on the following Friday, November 27th.

After four days of bitter argument, the Executive endorsed this motion on Thursday. It was supported by the DUP, UUP and Alliance. Sinn Féin opposed the motion, while the SDLP Minister Nichola Mallon abstained. All parties apart from the DUP favoured extending the lockdown by two weeks.

Mr Swann, speaking on BBC’s Sunday Politics programme, said he “reluctantly” supported the compromise, as the alternative would have meant all restrictions ending on Friday.

“I’m disappointed, I’m embarrassed and ashamed that it took us to Thursday to actually come up with this compromise agreement. That doesn’t go in my opinion far enough,” he said.

Mr Swann indicated that rather than all pubs and restaurants opening on Friday, November 27th, he would be seeking some curtailments to how that might happen.

The row in the Executive proved so acrimonious that Alliance leader and Minister for Justice Naomi Long said the DUP’s use of its veto prompted her to consider her position on the Executive.

Mr Swann did not give a direct answer when asked would he be similarly minded if the DUP were to veto any new proposals he brought forward. He suggested, however, that such a move could make not just his position but the position of the Executive itself “untenable”.

Over the weekend, Mr Swann told the BBC the reality was that the health service would not turn away people with coronavirus who required hospital admission, but that other services were being cut as a consequence.

Asked whether he was saying a coronavirus patient will not be turned away from hospital, but that the result of this decision was that a cancer patient may die, Mr Swann replied, “Yeah, that is as black and white as it is.”