Fundraising match pits Ulster team against the rest of Ireland 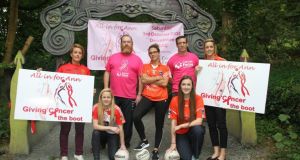 A selection of female Gaelic football players from across the country will play against a selection from Ulster in a fundraiser match in Armagh this Saturday, in aid of Cancer Focus Northern Ireland.

All in for Ann is a commemorative event organised by former Armagh ladies football manager James Daly in memory of his wife Ann, who died last year after her battle with cancer.

The match will take place on Saturday, October 3rd, in Dromintee club grounds.

Those on the Ulster team will include Sinéad McCleary, Caroline O’Hanlon and Sharon Courtney, as well as Daly’s daughter Katie, who is the Armagh goalkeeper.

Fresh from his 10th All-Ireland title win against Dublin last weekend, Cork manager Eamonn Ryan will step in as the “Rest of Ireland” manager for the night.

RTÉ’s Marty Morrissey will be commentating at the event and prizes to be auctioned include football boots autographed by Ronan O’Gara and Brian O’Driscoll, tickets to the U2 concert in Dublin and a weekend away in Manchester.

The All in for Ann team has already raised €25,000, which was the original target for the event.

Daly hopes that this weekend’s event will “round that figure up to around €35,000 or €40,000”, all of which will go to Cancer Focus Northern Ireland.

“All the hard work is done now so all we can do is sit back and let it happen. I’m hoping the fog will clear off for tomorrow and that it won’t be as cold as it is here today.

“There’s good talk around the place about the match and we’re hoping for a very good turn out”.

For more details on the event visit their Facebook page and to donate to the cause, please visit the fundraising website.