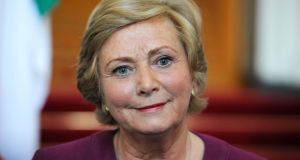 The Minister for Justice and Equality Frances Fitzgerald TD to give annual Michael Collins oration.

Minister for Justice Frances Fitzgerald will deliver the oration at Béal na Bláth this August to mark the death of Gen Michael Collins.

Béal na Bláth annual commemoration committee chairman Dermot Collins said: “We are delighted that Frances Fitzgerald has accepted our invitation to speak at Béal na Bláth this year on the 93rd anniversary of the death of Michael Collins. She is a very effective Minister for Justice and prominent member of this Government as well as very capable parliamentarian and we’re looking forward to hearing what she has to say.”

Ms Fitzgerald follows in the footsteps of Taoiseach Enda Kenny, who gave the oration in 2012, and more recently broadcasters George Hook and the late Bill O’Herlihy.

The commemoration is held on the nearest Sunday to August 22nd, the day in 1922 when Collins was killed in an ambush during the Civil War.