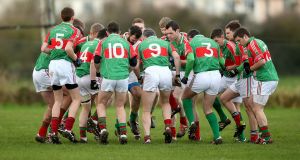 A senior football match due to be played on Friday night between Loughmore-Castleiney and Éire Óg Annacarty was postponed as a mark of respect, due to the death of Tom Kennedy. Photograph: Donall Farmer/Inpho

A GAA heartland is in shock following the death on Friday of a popular local farmer and long-standing club member who was the father of an All-Ireland-winning hurler.

Tom Kennedy (74) from Clogheraily, near the village of Loughmore in mid-Tipperary, died in an accident while he was working on his farm in the Ballycahill area, close to Holycross, at around midday on Friday.

His wife, Maureen, died in March last year and the couple had five children: David, John, Philip, Noel and Anne. David Kennedy played centre back on the Tipperary team who won the All-Ireland senior championship in 2001 and is still a regular with the Loughmore-Castleiney football and hurling teams.

The family is well-known in Tipperary GAA and farming circles.

The gardaí­ and the Health and Safety Authority (HSA) have launched investigations into the circumstances surrounding Mr Kennedy’s death, and were at the scene for several hours on Friday afternoon and evening.

It is understood the farmer was working on some land reclamation with one of his sons and using a tractor and trailer at the time. The tractor may have rolled backwards while he was standing behind it and struck him, causing fatal injuries.

Emergency services attended the location but Mr Kennedy was pronounced dead at the scene and his body was taken to University Hospital Limerick for postmortem examination.

Loughmore-Castleiney PRO Pat Healy described it as a “terrible” tragedy. “He was very deeply involved in the club back along, he would have been at all the meetings and driven young lads to the matches.”

Two of his sons lived with Mr Kennedy at Clogheraily and the family had a farm at Ballycahill, between Drombane and Holycross. The deceased was also involved with local drama groups some years ago.