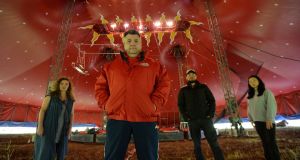 David Duffy, the managing director of Duffy’s Circus, lives, eats and breathes the big tent, the performers, the noise. This year, Duffy’s Circus, a staple of fairgrounds and festivals, celebrates its 150th anniversary. It could be its last.

“There is a very high chance that we will not be coming back when we normally do in March. I would say there is a 20 per cent chance of us ever reopening,” said Duffy, the sixth generation of Duffys to run the circus.

“It could very realistically be its last. I’ve never had to have that type of discussion before with my family, especially with my two sons Tom jnr, 27, and Jamie, 24, who have followed along into the business.”

For the family, the lockdown has been a bitter blow, since Duffy’s continued in business during the Civil War, the War of Independence, even the foot-and-mouth crisis, only to be stopped in its tracks by Covid 19.

Covid-19 has challenged the family in every other way, too. Duffy’s 91-year-old father, Tom, contracted the coronavirus: “The only way I can describe the past few months is by saying it has and is a hammer blow to us.

“It was a scary time for him and all of us his children over the threat to his life. He managed to pull through, which is miraculous in itself itself. Now financially, the circus lifeline quite likely may not have any heartbeat left.”

The circus will not return in August after the next phase of lockdown relaxations occur, if they occur, following a meeting in recent days between Mr Duffy, who shortly turns 60, and the family’s accountants.

“We have to look at the realities of the circus industry and it’s not good. I don’t want to lose my sons from the business as I want the Duffy legacy to live on but facts have to be faced,” he said.

With high insurance costs, Duffy’s, numerous other circuses and funfairs would be putting their companies at permanent risk if they were to reopen without the numbers needed to break even, he argues.

Once circuses and funfairs restart, their insurance cover, which costs anything from €35,000 up to €60,000 annually, cannot be paused again, if they are forced to shut indefinitely if there is a second wave of Covid-19.

“We understand many people will be saddened by this news, as are we. However, to protect both our company, staff and the communities we visit we feel we have no other option to see if we will even have a future next year,” he said.

The circus tent holds 800 people. Currently, Covid restrictions limit numbers to just 50. Next month 100 may be allowed inside: “Unfortunately with the people involved in the performance we’d end up with an audience of 10.

“Even if the cap on numbers didn’t exist it would be uneconomic for us to proceed with two-metre social distancing inside the big top. We feel cancelling the rest of the tour is the right thing to do.”

Charles O’ Brien of the Irish Showmen’s Guild says Duffy’s troubles are a sign of the industry’s turmoil. “A third of all circuses and funfairs, some [in existence] for as long as 300 years as they are family businesses, will never reopen after Covid-19.”

Up to 120 families are directly affected: “Only one of the dozens of such entertainment companies is still operating and is trialling a novel approach of opening as a drive-through entertainment event.

“No one knows how that will work out. There has been no cohesive approach by the Department of Culture and Heritage when it comes to urgent financial help and a decisive way on addressing increasing insurance costs.

“We are always the poor cousin of the other traditional and even fine arts. It is forgotten that the industry employs tens of thousands of people annually,” said Mr O’Brien, who represents circus artistes of all types.

Trevor Cullen and his son Timmy, 23, who runs an antique fun fair in Dún Laoghaire, reopened the business last Saturday. “I have to remain positive that the season for us will improve,” he said.

“I’ve taken a calculated risk with my insurance payments by only bringing the Ferris wheel and some of the carousels back into operation.”

The insurance premium has to be paid from July 23rd to February 28th next year: “If I’m forced to shut sooner, or Christmas doesn’t happen due to Covid restrictions, then financially the business is facing uncharted water.”