Dublin and London attempt to avoid collapse of Stormont 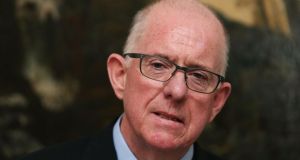 The British and Irish governments will this week make a determined effort to ascertain whether the DUP and Sinn Féin can arrive at a political arrangement that would avert the collapse of the Northern Executive and Assembly.

A series of high-level ministerial meetings are scheduled, with Taoiseach Enda Kenny also due to make a keynote speech that will address the crisis threatening Stormont since the alleged involvement of the IRA in the Belfast murder of republican Kevin McGuigan.

Minister for Foreign Affairs Charlie Flanagan said Sinn Féin had a particular responsibility to assist a resolution. “Normal politics will only be introduced on this island fully if Sinn Féin uses its influence and its exhortation to ensure the IRA is put firmly out of business,” he said yesterday.

Dublin and London will be examining the assessment of the political situation being made by First Minister Peter Robinson today as he returns from holidays to establish whether the DUP can be persuaded to remain in the Northern Executive alongside Sinn Féin.

Mr Nesbitt said the PSNI chief constable George Hamilton’s assessment that the IRA still existed and that IRA members were involved in the murder of Mr McGuigan, albeit without the sanction of the IRA leadership, had “shattered” trust in Sinn Féin.

“We believe the situation is not irretrievable and that there is still a bit more time to see if it can be rescued,” said a senior source yesterday.

“We expect the rhetoric to be condemnatory but we will also be looking out for any signals that indicate some resolution could be found,” the source added.

The British and Irish governments are conscious that Mr Nesbitt’s unilateral move has put severe pressure on Mr Robinson but they are also working on the consideration that he won’t want to be seen as being outmanoeuvred by the UUP leader, and that at the very least he will allow some time to determine whether there is any way out of this crisis.

Dublin and London will this week seek to facilitate a resolution. The Northern Secretary, Theresa Villiers, will discuss the situation with Mr Flanagan and Minister for Justice Frances Fitzgerald in Dublin tomorrow. The issue will be high on the agenda of Wednesday’s Cabinet meeting.

The DUP is due to meet British prime minister David Cameron shortly, possibly this week, while on Friday Mr Kenny will speak in Cambridge at a conference of the British Irish Association, which Ms Villiers is also due to attend.

The current focus by the governments is to establish the value of convening all-party talks that would not only address the fallout from the PSNI assessment about the IRA but would examine whether Sinn Féin would be prepared to deal with the deadlock over welfare reform that is also threatening Stormont.