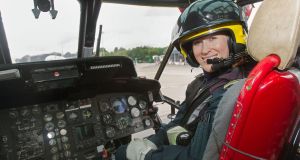 A significant section of the wreckage of the Irish Coast Guard helicopter has been found close to the lighthouse on Blackrock, 13km west of the north Mayo coast.

A team from the Air Accident Investigation Unit (AAIU), and two British investigators spent 90 minutes yesterday on the isolated outcrop, which is close to the last known position of the helicopter.

Weather and sea conditions are continuing to hamper efforts to locate the three crew from the helicopter, which crashed during a rescue mission on Tuesday.

Rescue agencies are still hoping the bodies of the crew – co-pilot Capt Mark Duffy, winch operator Paul Ormsby and winchman Ciaran Smith – are with the wreckage of the helicopter.

The helicopter had turned to approach Blacksod lighthouse for a routine refuelling when it lost communication. No Mayday was issued and no emergency locator beacons were picked up.

Rescuers hope the signal from the “black box”, which was detected on Wednesday, will lead them to the location of the helicopter, if it is still within the fuselage.

A heavy swell around the lighthouse prevented efforts to pinpoint the flight recorder yesterday.

The Irish Lights tender Granuaile, which has a dynamic positioning system allowing it to operate in a heavy swell, is due into Blacksod Bay over the weekend to assist with the effort.