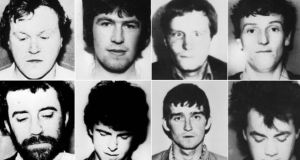 A civil liberties body has stated that it will contest a decision by the Northern Secretary Theresa Villiers to block a fresh inquest into the SAS killings of eight IRA men and a civilian in Loughgall, Co Armagh, on the grounds of protecting British national security.

The Belfast-based Committee on the Administration of Justice (CAJ), Sinn Féin, the SDLP and the men’s families have deplored the move while the North’s Attorney General John Larkin said the decision was “profoundly wrong in principle”.

Mr Larkin’s office confirmed to the CAJ that last month Ms Villiers citing “the interests of national security” blocked a fresh inquest into the 1987 Loughgall killings.

His solicitor, writing to the CAJ said, “the Attorney General wishes me to inform you that he considers the Secretary of State’s decision to be profoundly wrong in principle and is currently reflecting on the appropriate response to it.”

The CAJ’s director Brian Gormally said there was a “relentless campaign, led by the UK government and supported by some elements in Northern Ireland, to suppress the truth about the activities of state agents during the conflict”.

“The aim is to ensure impunity for any crimes and human rights violations committed by servants of the state, whether policemen, soldiers or secret agents,” he added.

“This is the latest stage in this epic cover-up using the deliberately undefined concept of ‘national security’ to stifle proper investigation,” said Mr Gormally.

The IRA suffered its worst single blow in terms of loss of life in the May 1987 SAS shootings. The eight IRA members killed were all members of its east Tyrone brigade, viewed as one of the most ruthless of the organisation’s units.

The IRA was planning to bomb the Loughgall RUC station. They drove into the town with a hijacked digger carrying a 200lb bomb and a blue Toyota van. A total of 24 SAS British army soldiers, who had intelligence on the attack, were primed and lying in wait. Some 600 shots were fired and all the IRA members died at the scene.

A 36-year-old civilian, Anthony Hughes, who was driving his car into Loughgall at the time, was also killed by the SAS in the shooting. His brother, who was in the vehicle with him, was hit 14 times but survived. The British government later apologised to the Hughes family and confirmed Mr Hughes was “wholly innocent of any wrongdoing”.

Mr Gormally said the CAJ would challenge Ms Villiers’ decision. “We don’t know why this case has been singled out for the ‘national security’ veto - is it because the SAS were involved, or did a UK Minister give the green light for the ambush?” he said.

The decision was a human rights violation and an “assault on the right to truth and transparency in a democratic society”, added Mr Gormally.

“The reaction of Theresa Villiers in blocking the exposure of security force involvement in this incident simply confirms the view that the British government has little serious interest, along with other parties, in dealing with the past on an ethical basis,” he said.

A spokeswoman for Ms Villiers said she issued “national security” certificate as she was required to do under law. She said the matter would now be considered by the British Advocate General Dominic Grieve QC, who would make a decision on the matter “entirely independent of government”.