CityJet to run 18 weekly flights between Cork and London 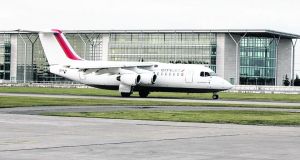 CityJet has confirmed plans to operate 18 flights a week between Cork and London City Airport from October.

CityJet has confirmed plans to operate 18 flights a week between Cork and London City Airport from October.

The airline’s executive chairman Pat Byrne said CityJet run three daily services on weekdays between Cork and London with one flight on Saturdays and two on Sundays.

Mr Byrne said the airline, which is headquartered at Swords in north Co Dublin, sees significant potential in Cork and the greater Munster region for flights directly into the heart of London.

“The indications are there are many travellers, both business and leisure that want to enjoy the fast access and hasslefree experience that London City Airport offers “said Mr Byrne.

Mr Byrne said that London City Airport is the only airport “actually in London” and it offers easy access to the city’s financial district as well as the West End and other visitor attractions.

Cork Airport managing director Niall McCarthy welcomed the announcement and said he was delighted that the company had selected Cork.

“It’s fantastic news for both business and leisure travellers from across the Munster region with easy access right into the city of London,” said Mr McCarthy.

“We’re looking forward to working with CityJet on its new route and building on this announcement in the future.”