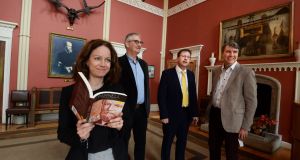 We need to look at an alternative to the detention of young people, the Ombudsman for Children has said.

Speaking at the Parnell Summer School in Wicklow on Monday, Dr Niall Muldoon said a lot more could be done to divert young people away from detention at the Oberstown centre in Co Dublin.

“I don’t think we have invested sufficiently in intervention,” he said. Proper supports for parents, support for early childcare, easily affordable and accessible early childhood education and supports when a child has difficulty in school were needed, he said.

“That means not waiting for 12 months for a Nebs [education] psychologist,” he said. It also meant not waiting for the resources needed to follow through on recommendations made for children.

“We need to join the dots to ensure the most vulnerable are supported so they don’t grow up to become the most disadvantaged and I’m not sure we have that yet,” he said.

Dr Muldoon said the Garda diversion programme, aimed at keeping young people who have committed crime away from incarceration, was “a very positive scheme and produces very strong results”.

He said 7,000 young people have been helped through it, but it could be improved.

He said the independent evaluation of the programme was “not quite as independent” as he’d like, with 50 per cent of members on the committee being from An Garda Síochána. He also said there were gaps in the data and he was not sure of the outcomes and criteria for admission.

“On average, 15 per cent of children referred to the programme are deemed unsuitable for it and we cannot easily learn why that is the case and what happens to those young people,” he said.

This year, the five-day summer school is focusing on crime, punishment and justice.

Deputy James Lawless, Fianna Fáil, highlighted the recent Jobstown trial, and criticised Taoiseach Leo Varadkar for his comments in the Dáil chamber on evidence given by gardaí in the case. He also criticised “the ubiquitous commentary led by national politicians” on social media during the trial, “along with rallies and other campaigns advocating a particular determination by a jury”. This presented “an alarming precedent where simple rules of contempt are ineffective in ensuring the integrity of the trial”.

“As highlighted recently by the chief justice, the manipulation of trials by social media is a danger which neither locking someone up for contempt of court, nor lengthy civil proceedings for defamation, is adequate to prevent,” he said. “For politicians to invite populist commentary about how courts operate only undermines the ability of our justice system to operate in the confidence that its ultimate results will be accepted.”

The deputy also said the Jobstown trials gave a sense of the difficulty for the courts in labelling actions as criminal when a political motive exists.

“I think it would be widely accepted that the way the Tánaiste was treated on that day was completely unacceptable and should be condemned,” he said. “Whether that condemnation is best expressed via criminal charges and what type of charges remains a matter for debate. But politicians must defer to the DPP in those decisions.”

Speaking on solitary confinement at the summer school, Fíona Ní Chinneide, acting executive director, Irish Penal Reform Trust, praised the reduction in the numbers of those being held in isolation, down from 211 in 2013 to 44 in April 2017. She highlighted the dangers, including the negative mental effects.

She also raised concerns about children in detention, at Oberstown, being held in “single separation”, though this was not the same as solitary confinement, she said.

She said the Health Information and Quality Authority (Hiqa) reported just over 3,000 such incidents in 2016, the majority of which were appropriate.

“The overall number of incidences still seems quite high,considering the numbers of children who are on the campus at any one time ranges between 35 and 45,” she said.

She said that suggested improved staff supports were needed along with training in de-escalation techniques, stronger oversight and analysis, and provision of more activity for young people.