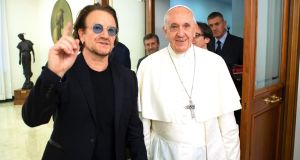 Bono with Pope Francis at the Vatican on Wednesday, the U2 singer was meeting the pontiff to sign an agreement between Bono’s charity, ONE, and the Scholas Occurentes educational charity. Photograph: AFP/Getty Images

Pope Francis has been told by U2’s lead singer, Bono, that to many people in Ireland it looks as though the abusers in the Catholic Church “are being more protected than the victims”.

“You could see the pain in his face,” the singer declared in the Vatican after he met with the pontiff to sign an agreement between Bono’s charity, ONE, and the Scholas Occurentes educational charity.

Regarding the sexual abuse crisis facing the church, a spokesman for the singer said that Bono believed Pope Francis “is the leader to put this right and change people’s perceptions that the church is doing more to protect the abusers rather than the victims”.

“I think he is an extraordinary man for extraordinary times,” the singer said, adding that the pontiff was “aghast” when they talked about the sexual abuse crisis in Ireland.

“I thought he was sincere,” said the singer. His ONE charity seeks to boost education for the “130 million girls around the world do not go to school, because they are girls”.

Scholas, meanwhile, was started in the Archdiocese of Buenos Aires when Francis was in charge, where it helped poorer schools to build ties with richer institutions elsewhere.

“We haven’t figured out what we are going to do together,” Bono told the Catholic website Crux, “but we sort of have a crush on each other.

“Honestly, he is quite a radical thinker and I felt quite old-fashioned sitting next to him,” said the singer, who said the pope had urged him to encourage children “to start with art” before any other subjects.

Speaking at a press conference later, Bono said that during the meeting they had spoken about “how we have to rethink the wild beast that is capitalism and how, though it is not immoral, it is amoral and it requires our instruction”.