Bob Geldof should have Freedom of Dublin reinstated, says Martin 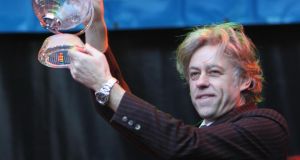 Bob Geldof receives the Freedom of the City of Dublin in 2006. Photograph: Bryan O’Brien

Fianna Fáil leader Michéal Martin has called on Dublin City Council to reinstate the Freedom of the City it gave to Bob Geldof.

Dublin City Councillors voted on Wednesday night to rescind their 2000 decision to bestow the Freedom of the City on Myanmar leader Aung San Suu Kyi because of the repression of her country’s Rohingya Muslims.

The council also agreed to a request from Geldof to remove his name from the roll. He publicly handed back the scroll he was given in protest at the fact that Ms Suu Kyi retained her Freedom of the City, accusing her of being a “handmaiden to genocide”.

Mr Martin said the decision by city councillors was wrong. “Bob Geldof was awarded the Freedom of Dublin City for good and noble reasons that still stand. Decision not to give it back to him should be reversed,” he said in a Twitter post.

Geldof told RTÉ’s Liveline last week that he was “absolutely disgusted” by the decision to remove his Freedom of the City honour.

He claimed to have made it clear that if Ms Suu Kyi’s name was removed from the rolls of those given the Freedom of the City, he would be “more than honoured” to retain his award.

He also stated that he went through the correct protocol by contacting the city manager Owen Keegan to say he was handing back his scroll.

He accused Sinn Féin and its lord mayor, Cllr Mícheál Mac Donncha, of having a political vendetta against him.

Cllr Mac Donncha accused Geldof of “treating the city with contempt” in the manner in which he “threw back in our faces” the accolade. He said the vote by councillors was only to confirm that Geldof had renounced the honour.