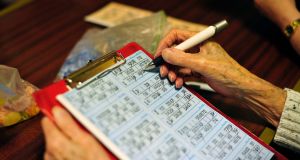 Legislation to modernise gambling laws would put a cap on prize money of 50 per cent of a bingo hall’s takings on a night, a sharp drop from current prize rates. Photograph: Aidan Crawley

Bingo halls could be forced to close if new gambling laws capping prize money leads to a drop-off in footfall, bingo operators have warned ahead of a protest outside Leinster House on Tuesday.

Legislation planned to modernise gambling laws, due to come before the Dáil on Wednesday, would put a cap on prize money of 50 per cent of a bingo hall’s takings on a night – a sharp drop from current prize rates of between 75 and 85 per cent.

Emma Lavelle, head of operations at Jack Potts – one of the largest bingo operators in Dublin – said the proposed legislation had created “total uncertainty” in the industry.

Ms Lavelle claimed it would lead to local bingo halls closing down as “there is no way we’d be able to operate in that structure”.

The company runs bingo halls in Whitehall, Cabra, Tallaght and Crumlin. Ms Lavelle said people would stop coming to bingo if the prize rate was reduced to 50 per cent under the proposed Gaming and Lotteries Bill 2019, currently making its way through the Oireachtas.

“Customers have already told us they won’t be coming at those prices,” she said.

Groups from a “Save Our Bingo” campaign are planning to hold a rally outside Leinster House on Tuesday. Ms Lavelle said the approximately 85 staff who work for Jack Potts were worried about their positions amid uncertainty over the effects of the planned changes.

A Department of Justice spokesman said Minister of State David Stanton, who has responsibility for gambling policy, had extensive contact with bingo operators.

“In the course of preparation of the 2019 Bill, concerns arose with the seemingly minimal amounts returned to the lottery licence-holder, (who must be a charitable or philanthropic cause), by bingo operators acting as agents,” he said.

“This new payment matrix represents a progressive measure that ensures that charities receive a fair share from bingo operators and is both balanced and sustainable.”

Naomi Reilly (55) said she was 12 the first time she went to a bingo hall with her mother, and has been playing in the north Dublin Whitehall club for 30 years. Her 21-year-old daughter now comes once a week with her.

Many of those who play regularly would not socialise in pubs. “We enjoy our bingo, we enjoy our night out – don’t take that away from us.”