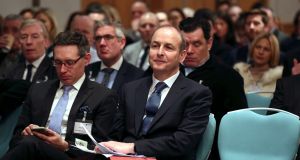 Fianna Fáil leader Micheál Martin has said he will ban vaping for under-18s and wants to “denormalise” the practice for everybody else.

Mr Martin said he found it “extraordinary that vaping just arrived on the market with no health checks and with no assessment as to the potential harm it could do”. In 2004, Mr Martin became the first health minister in the world to implement the smoking ban.

Mr Martin said vaping became popular without going through any of the rigorous checks that food businesses or pharmaceutical businesses have before releasing products to the market. He was speaking at a Dublin Chamber of Commerce event organised before the election was called.

“We are not sure what this impact it would have on the lungs in the future,” he said.

“I find that scary. It’s growing exponentially among young people, and that’s a big worry that I would have.

“I would ban it for under-18s. There would be a broad consensus across the political divide on it. We need to do with what we did with tobacco and denormalise it.”

Mr Martin made his remarks in a question-and-answer session from the breakfast audience at the Conrad Hotel.

He accused Sinn Féin and left parties of “spewing out negative hostility” towards multinationals working in the Irish economy.

“If you monitor the debates over the last five years, you rarely hear anybody in Sinn Féin or the left talk in any positive way about multinationals.

“It’s always the multinational corporations who are out there to rip off this, that and the other. The fundamental underpinnings of the Irish economy over the last 50 years has been the level of foreign direct investment coming into the country.”

Mr Martin said Sinn Féin often opposed trade deals that would benefit the Irish economy including the recent deal between the EU and Canada.

“Instinctively, we should be in favour of free trade agreements that open up new markets for our goods and services. What you find with Sinn Féin is that it opposes all EU trade agreements.”

He ruled out a return to large-scale tax incentives for property development for which previous Fianna Fáil governments had been criticised.

“There was a sense that they became abused. The Commission on Taxation was the catalyst for drawing back on tax incentives in relation to property because they just led to runaway and not wise investments.

“To be frank with you, there is going to be targeted approaches in some areas to facilitate investments, ie over-the-shop residential. It could lead to some results, but I don’t see any return to wholesale tax relief in terms of development into the future.”

In his speech, Mr Martin pledged another €100 million to third-level funding as recommended by the Cassells report.

He said the multinational sector was thriving but that indigenous businesses were falling behind because the country lacked a national small and medium enterprises plan.

In government, Fianna Fáil will establish a SME growth taskforce, Mr Martin said. If elected to government, he also pledged to bring in insurance reform and legislation to cut down on insurance fraud and to reform the Personal Injuries Assessment Board.